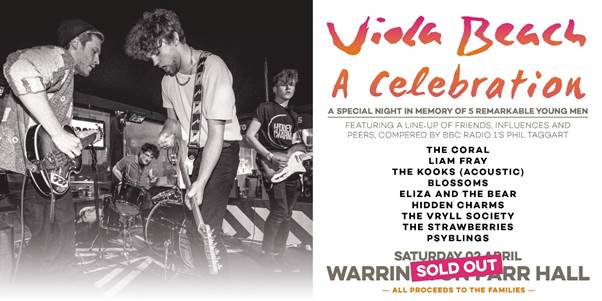 A special night in memory of the lives of the members of Viola Beach and their manager Craig Tarry is set to take place at Warrington Parr Hall on Saturday 2 April, with the full line up now announced.

The sold out show will feature a line-up of friends, bands they’ve played with, influences and peers from across the country which will be compered by BBC Radio 1’s Phil Taggart.

The Coral and Liam Fray are set to perform alongside an acoustic set from The Kooks. Special guests Blossoms, Eliza and the Bear, Hidden Charms, The Vryll Society, The Strawberries and Psyblings will also join together to celebrate the lives and music of the band. All proceeds from the show will go to all their families.

The four members of Viola Beach, Kris Leonard, 20, River Reeves, 19, Jack Dakin, 19 and Tom Lowe, 27, all tragically passed away following an accident near Stockholm on 13 February.