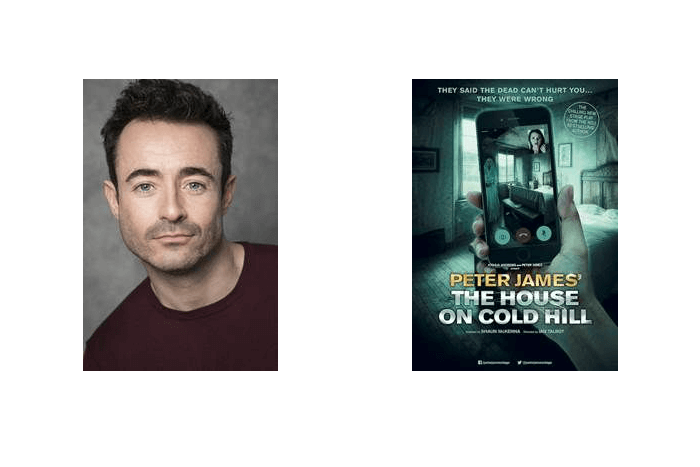 BAFTA nominated actor Joe McFadden is set to star in the world premiere production of The House On Cold Hill, coming to Manchester Opera House.

Adapted from Peter James’ best-selling 2015 novel and based on the author’s own real-life experience in a haunted house, the play will star Joe McFadden as Ollie Harcourt, husband to Caro and father to Jade, whose new dream home quickly turns into the stuff of nightmares, as they begin to sense that they aren’t the only residents at Cold Hill.

Joe McFadden is perhaps best known for playing series regular Raf di Lucca in BBC1’s Holby City from 2014 – 2017, and as P C Joe Mason in Heartbeat from 2010 – 2014. Other acclaimed TV roles include Sex, Chips and Rock n Roll, The Crow Road (for which he received a BAFTA nomination), Cranford and Take The High Road. His extensive theatrical credits include working with John Tiffany and the National Theatre of Scotland on The Missing, touring the UK with Alan Ayckbourn’s Haunting Julia, Harvey Fierstein’s Torch Song Trilogy at the Menier Chocolate Factory, Rent at the Shaftesbury Theatre in the West End and Rainbow Kiss at the Royal Court. Last year he partnered with Katya Jones in BBC1’s Strictly Come Dancing and captured the nation’s hearts, eventually winning the series to become the 2017 Strictly Champion.

Speaking about taking on the role, he commented, “I am so pleased to be on board for the new Peter James stage play. Peter’s had such incredible success as a novelist around the world and it’s been great to see how well his books have translated to the stage. The three previous plays have been huge hits with audiences around the country, so I am excited to have the opportunity to now bring his brilliant ghostly thriller to the stage for the very first time. I am looking forward to us shocking and thrilling audiences around the UK with The House On Cold Hill.”

The House on Cold Hill becomes the fourth play in his box office smash hit and critically acclaimed stage franchise following the huge success of Not Dead Enough, The Perfect Murder and Dead Simple on stage. Nearly half a million fans have now seen his work on stage in 30 cities across the UK and Ireland, with stars including Claire Goose, Shane Richie, Jessie Wallace, Tina Hobley, Les Dennis, Jamie Lomas, Laura Whitmore, Robert Daws, and Dawn Steele.

When is The House on Cold Hill performed at Manchester Opera House?

The House on Cold Hill runs at Manchester Opera House from 13-18 May 2019.  Tickets are on sale now.