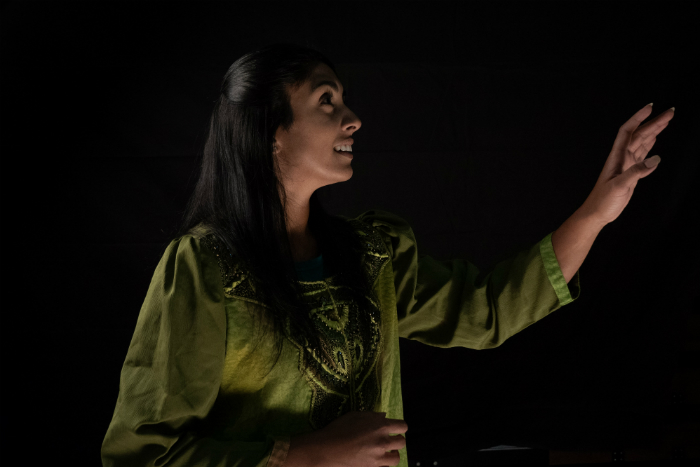 A series of Greater Manchester’s libraries will be transformed into performance spaces in a brand new immersive theatre show for local schools.

From Monday 4 March, ten libraries will enter the world of Alluriat.  The original production from Cheshire theatre company Forest Tribe aims to get local schools and children to engage with their local public spaces.  It shows them in a new light, demonstrating how art can transform libraries.

Book shelves, reading spaces and meeting rooms will become a watery wonderland to tell the tale of Alluriat – a bond that seems unbreakable beneath the waves. Told by two performers – Purvi Parmar and Jennifer Kay – using puppetry, illusion and physical theatre, this bold new show fuses stunning visuals and state-of-the-art digital technology to explore themes of love and division, nurture and abandonment and environmental change.

Forest Tribe Artist Director Debbie Bandara both directs and choreographs.  Alluriat has been written by artist, msculptor and blacksmith David Freedman, based on his original poem.

Which libraries does Alluriat take place in?

The two week tour is open to local school children from the surrounding areas who have been special invited to take part.

Forest Tribe Dance Theatre was set up by Debbie Bandara in 2016. Based in a restored watermill in Cheshire, Debbie and David Freedman, writer and set designer, develop work with strong social and ethical themes, inspired by living and working in a hydro-electric powered mill. Forest Tribe have performed across libraries in the north of England as well as the Lowry in Salford, Tara Arts in London and Theatr Clwyd in Wales.

Alluriat was developed as an R&D piece in 2016 with Arts Council funding and support from Oldham Library. Schools education packs and lesson plans are available to download to accompany each performance.