In Review: The Nutcracker at the Palace Theatre 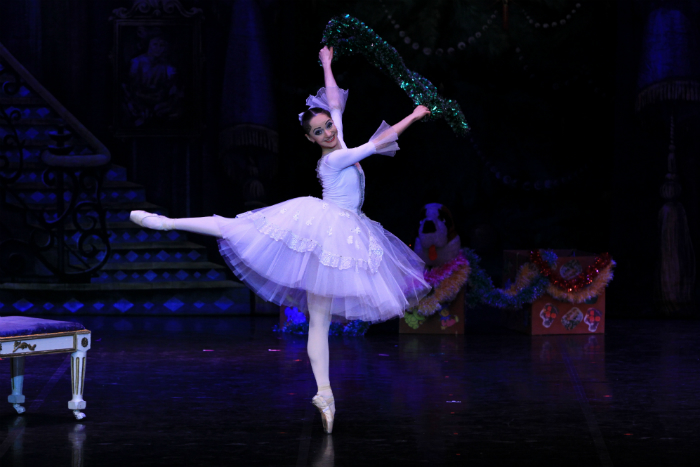 After a triumphant 2014-2015 season which saw Moscow City Ballet perform the outstanding Swan Lake in Manchester, the renowned dance company returned with a captivating performance of Tchaikovsky’s magnificent The Nutcracker.

The wonderful ballet tells of the adventures of Clara who is swept away into a magical wonderland, meeting the Sugar Plum Fairy, after she is enchanted by the wonderful Nutcracker doll and her Uncle Drosslemeyer’s box of performing toys.

The performance is magical from start to finish.  As the production opens at the family home in front of a beautiful stage setting of fireplace and Christmas tree, we are immediately whisked away from the reality of Manchester to the enchanting festivities of Clara’s family.  As the family dances around the fire and Uncle Drosslemeyer’s performing toys are brought to life, I’m starting to feel in the Christmas mood (only 4 weeks later or 45-plus weeks early depending on your outlook). That’s the effect The Nutcracker has – it is truly a festive treat.

The fireplace and Christmas tree backdrop is just one of several marvelous settings used, and those along with the beautiful costumes help to bring a truly vivid feel to proceedings and allow the audience to feel fully immersed in The Nutcracker.  There are a couple of crowd pleasing moments as a canon fires, making many audience members jump out of their seats, during the battle between the nutcrackers and mice and as snow machines have snowflakes falling on to the audience below.

Yulia Zhuravleva as Clara and Andrei Zhuravlev as the Nutcracker Prince lead the way and are sensational throughout.  In particular, Yulia Zhuravlev performs the role of Clara perfectly, coming across as a wide-eyed, eager youngster caught up in the magic of the season and the wonderland to which she is transported.  Her movement is elegant, yet excited, as she discovers the wonders of the fairytale world.

But they are far from the only outstanding performers.  In fact the entire company is exceptional.  Particularly notable amongst the soloists are Ekaterina Tokareva and Marina Larina as the Spanish Dancer and Chinese Dancer respectively.  Martina Larina’s turn, albeit brief, certainly delights the audience with a touch of humour.  Liliya Orekhova as the Flower Fairy is excellent and Marina Larina (Doll), Valeriy Kravtsov (Nutcracker Doll) and Yaroslav Alekhnovich (Mouse King Doll) are delightful in the opening act, Marina Larina also at one point displaying admirable control and strength holding her pose for well in excess of five minutes whilst the action takes places around her.

The group work is also impressive with the menacing grouping of mice providing a highlight, whilst the sight of the 18 snowflakes moving in unison on stage is mesmerising.

The ballet takes place to the majestic Tchaikovsky score, which is performed well by the Moscow City Ballet Orchestra.  It is filled with pieces which have long since entered into the public consciousness making The Nutcracker one of the most accessible of ballets.  Whilst the musical side of the production is well performed, it’s impossible to shake the feeling that the orchestra is holding back slightly, but that does not detract from the overall production.

It’s easy to see why The Nutcracker is such a delightful and enduring ballet and it is done justice by Moscow City Ballet, stretching out the festive season for a few extra weeks.

The Nutcracker is performed at the Palace Theatre until Saturday 16 January.