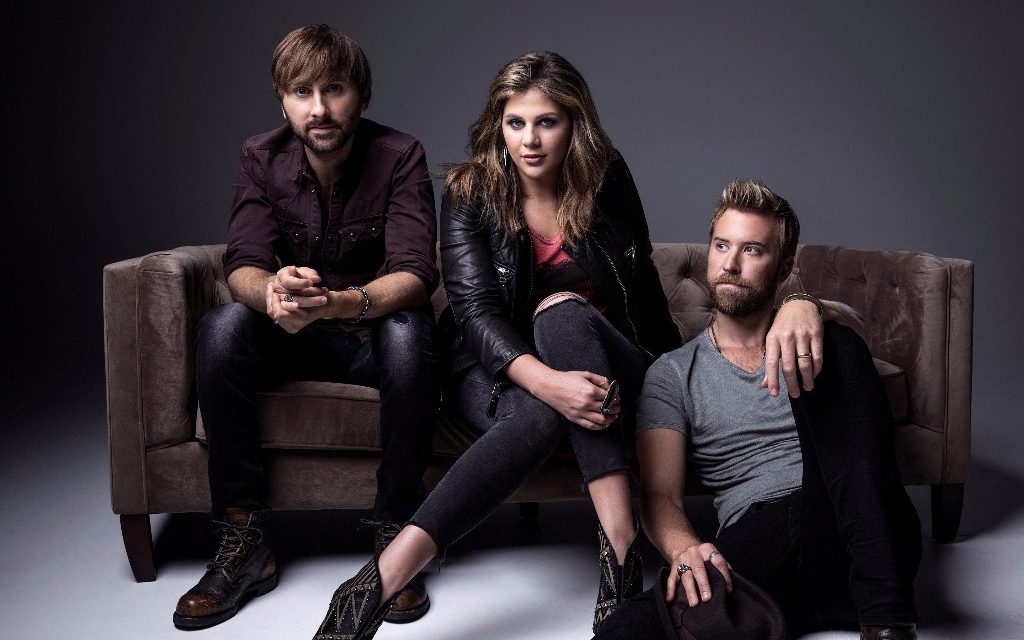 It’s pretty much a packed house, filled with anticipation, at Manchester Arena as Lady Antebellum open their first UK tour for several years.

Formed in 2007, the group, composed of Hilary Scott (lead vocals), Charles Kelley (lead, background vocals and guitar) and Dave Haywood (background vocals, guitar, piano and mandolin), have become one of the biggest country music acts in the world.  The multiple Grammy award winners have been cited as major inspirations by many country music acts, with the likes of The Shires acknowledging their influence when recording debut album Brave.

On the evidence of their Manchester Arena showing, it’s easy to see their appeal – they are talented, slick and bring quite the party.

But before Lady Antebellum take to the stage, it’s the turn of one of country rising stars, Kelsea Ballerini, to perform.  Only the day before the Manchester Arena gig, Kelsea Ballerini was confirmed to play at London’s Country-2-Country Festival in 2018.

In the multiple-CMT Award nominee Ballerini’s 30-minute set she easily shows that she can hold her own with country’s biggest names.  Striking the perfect balance between upbeat and slower love songs, she performs huge crowd favourites from her debut album The First Time and her upcoming release Unapologetically (due out 3 November).

XO, Dibs, Yeah Boy and Love Me Like You Mean It are all winners with the near capacity crowd and she receives huge cheers throughout.

Moments before Lady Antebellum step on to the stage, there’s an opening salvo from two high energy trumpet and trombone players borrowed from Justin Timberlake’s band.  The duo deserve a mention of their own for the incredible energy they bring to proceedings throughout the night.  The inclusion of a brief Sugarhill Gang riff during the opening seconds perhaps panics some of the country music purists out there, but for everybody else is a sign of intent – a high octane, upbeat show.  Incorporating brass elements brings a nice New Orleans twang to the Nashville sound which works well.

The multi-million selling band perform a range of material from their latest album Heart Break and earlier releases and strike the right balance between promoting new tracks and performing old favourites like American Honey and We Owned The Night.

And whilst the high energy show has the crowd up and moving (it’s no surprise that they create such a buoyant feeling with up to ten musicians on stage at any one time), it’s the stripped back acoustic segment which provides one of the highlights.  With a slight technical hitch preventing them from using the piano, they improvise (acknowledging that they always have fun when something goes wrong), and perform acoustic versions of Hello World, Somebody Else’s Heart and Shania Twain’s Still The One.  The contrast between the full on party atmosphere and the delicate trio of songs is stunning.

There’s a poignant moment as Lady Antebellum mention the recent Las Vegas shootings.  It strikes with the crowd, knowing that only a few months back the very Arena in which we are suffered its own tragic attack.

The New Orleans meets Nashville feel quickly returns in spectacular form, with the deliciously sleazy sounding You Look Good providing a stand-out moment.  Charles Kelley, accompanied by the on-loan trumpeter and trombonist even makes his way into the crowd, dancing away, thrilling fans.

After a brief hiatus at the conclusion of the set, the trio return to the Manchester Arena stage for a two song encore, performing the excellent Need You Now before finishing with Learning To Fly, a tribute to Tom Petty against the backdrop of his image.  It goes over well with the crowd, who are all too aware of the influence which Tom Petty has had on musicians the world-over.

Whilst it has been a few years since Lady Antebellum last performed in the UK, there will no doubt be many fans hoping that they make their return much sooner this time.

What did fans thing of Kelsea Ballerini and Lady Antebellum at Manchester Arena?