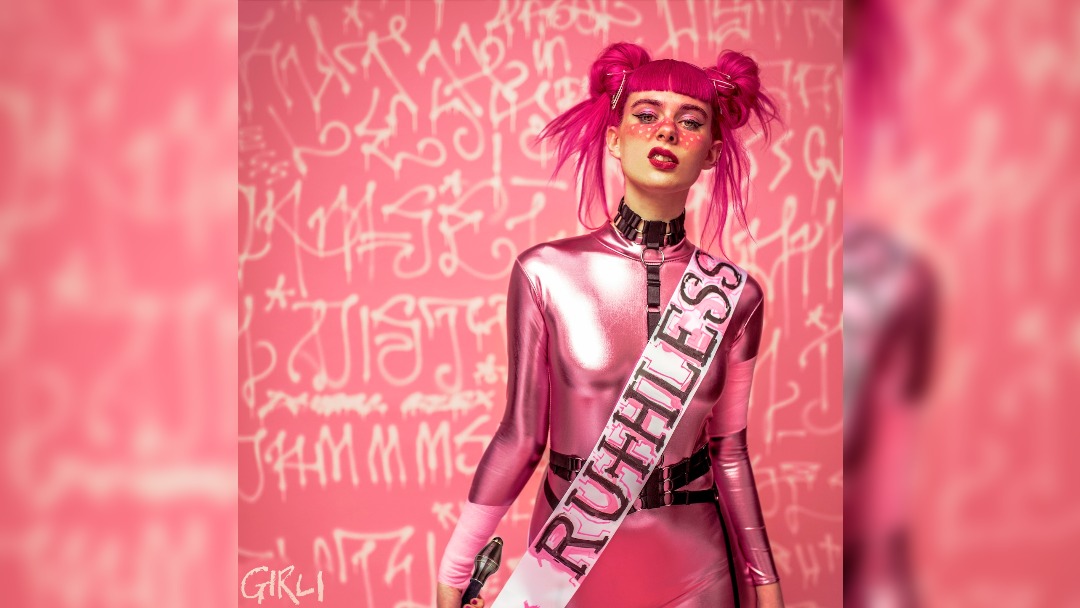 Following the release of her latest five-track EP Damsel In Distress, Girli (aka Milly Toomey) is on the road.  In the midst of an 18-date UK and Ireland tour, including gigs in Manchester and Liverpool, Girli joined us for a Q&A on the EP, getting ready for tour, and the importance of fan interaction:

Your new EP Damsel In Distress was released just a few weeks back – what are your thoughts now you’ve had time to get it out there?
I’m so proud of this EP. I think lyrically it’s the most open and honest I’ve been with my fans about my personal struggles – I see these songs like 5 diary entries, each one is me spewing out my guts about something that’s happened to me over the past year. Fans have been loving the EP and I’m so happy!! it feels like my first proper comeback since my album Odd One Out.

What was the creative process for Damsel in Distress?
I wrote the songs in London and Stockholm with some really awesome collaborators. More Than A Friend, the first single and the fans’ favourite, was written with my bestie July Jones. I love working with other queer women when making music because I can go in with an experience and I don’t need to explain myself; they get it and will help me express it into a sick song.

Did you face any particular challenges during the writing or recording process?
Writing Dysmorphia was difficult because it’s about something that has fucked with my life for so many years and I’d never been able to put it into words until then. I was having a really bad week with my body perception and writing this song, although very therapeutic afterwards, was pretty painful.

“this is what I’ve been trying to make for years”

Was there a point when you were writing or recording it when you thought ‘yes, this is it, this is exactly what I want’?
I actually had that moment when I saw the first cut of the music video for More Than A Friend. I thought, holy shit, this is what I’ve been trying to make for years and always had suppressed by the people around me in my team.

What were your thoughts on your first listen back after the final version was put together?
I was so excited. I thought holy moly I’m gonna make this a visual and musical story that is so ME I’ll never regret putting it out into the world, like I did with Odd One Out. I loved the songs on that album but the visuals, artwork, delivery of it didn’t feel authentically me ever.

You’re on the road with your Damsel In Distress Tour. What were your thoughts leading up to the opening date?
Honestly, pure fear. I have huge imposter syndrome, so I wasn’t sure if people would even come, or if I could pull off a completely independent DIY tour and it not be a totally trainwreck. Then when on the first night I walked out on stage to a packed room of screaming people dressed all colourful and excited and saw my all-women/non-binary team at the merch stand and bossing everything I was like “holy shit I did it”.

You have put a huge effort into pulling the shows together – in fact you’ve pretty much done everything yourself including self-financing, making your own stage setting. Can you tell us a bit about what’s gone in to it and how you have put everything together?
I knew from the day I announced the tour that I wanted to do it my way, and have full control over everything. In the past, I’ve had financial support from labels for shows, which with my current indie label I decided I didn’t want, as I wanted to own my touring earnings outright and have autonomy over the decisions made, from the setlist to the merch designs to the stage dressing to the crew. So I decided, this is gonna be fucking hard but I wanna do it on my own with a small crew of women and non binary folks and I wanna learn about touring so that I don’t get fucked over ever again. I couldn’t have done it without everyone in my amazing crew, and my incred support act July Jones. It was a huge team effort to make this tour happen.

“lots of crying, lots of days where I wanted to give up”

Having full control over the tour must be at the same time incredibly freeing but also bring with it a lot of pressure and responsibility. How did you deal with that?
Honestly, it was fucking hard! Lots of crying, lots of days where I wanted to give up, but I’m so lucky that I had a lot of support from some key people who made me believe in myself when I didn’t. My girlfriend and my closest friends were so amazing, and helped me make this tour a reality.

The personal aspects of the EP and its vulnerability will no doubt come on stage with you. How do you feel putting your innermost thoughts out there in front of a live audience?
It feels like healing, and I’m so lucky that there are actually crowds of people who wanna come and see me sing about my feelings, thoughts and worries. It’s a kind of therapy for me.

Is there a track from Damsel In Distress you’re particularly looking forward to playing?
I Don’t Like Myself, because i’m so passionate about the topics I mention in that song and, because it’s the newest track from the EP and hasn’t been out long, when I see people in the audience singing along to it I know that they must’ve connected to the topics and that it means as much to them as it does to me. And also More Than A Friend – my audience is largely LGBTQIA+ and this song feels like a love letter to that community.

You’ve made it clear that it’s important for you to have that interaction with fans – can you tell us a bit about how much that means?
I’ve always been big on interacting with my fans in the flesh but because of Covid both me and them were so deprived of that – the only way I’ve been able to connect with them is through social media, which is amazing, but so far removed from reality. These shows are so special because I can sing to fans, I can talk to them after the shows and hear their stories and thank them for supporting me as an artist. I’m so grateful to my fans – they make everything possible. Without them I’d probably have given up by now.

What are your plans when you finish the tour?
More writing, recording, or pursuing other creative outlets? Writing!! And plotting more tours for 2022 😉

When does Girli headline at Night People, Manchester?