In Interview: Dollie Demi – “we’re going to show the world that we’re a band and we are willing to dominate” 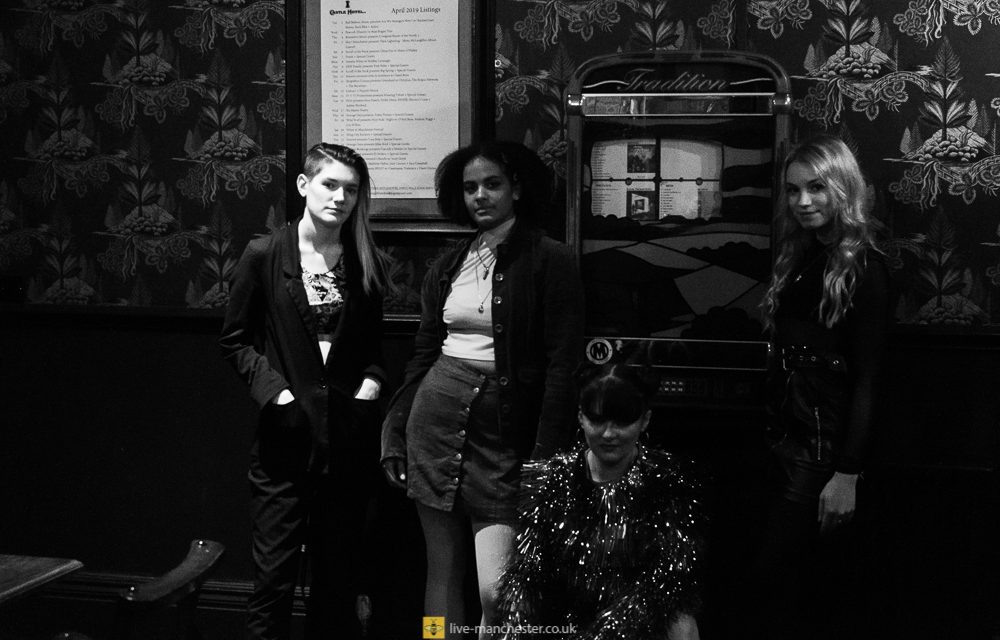 They’re one of Manchester’s fastest rising acts so when we got the opportunity to have a chat with Dollie Demi we jumped at the chance.

Backstage at The Castle, we spoke to three of the quartet, Demi, Ella and Mia about their music, plans and the challenges they face in the industry and society.

“Our genre is punk-pop with garage rock.  … We have got vibes of riot girl but I wouldn’t say we’re a hardcore riot girl band,” explains Demi as we discuss their music.  “I won’t even say we’re anything like it,” adds Mia, “Our rhythm is more punky. … Well, punk pop but more on the poppy side.  It’s uplifting, upbeat, having a little dance over there.”

That’s the beauty of Dollie Demi.  You can hear all varieties of influences and a sound palette which draws on various types of music.

In terms of their live performances, they have fun describing them.  ‘Crazy’ … ‘energy’ … ‘fun’ … ‘girl power’ … ‘visually stimulating’ … ‘drunk Mia’ … ‘sexual frustration in music’ are all terms they laughingly throw around.  But when they say “Catchy songs, songs that people can … sing to,” they’re spot on.  When they go on stage at The Castle an hour or so later, they have the crowd in their hands – they are energetic and fun, people are singing along, they are powerful.

“We’re not those kind of girls. We are unique.”

They view performing as ‘empowerment for women’.  “Women should feel sexy about themselves and confident with their bodies and this is what we express – confidence within women and confidence within,” they explain.  “I feel like some females are really insecure about themselves because they look at things in magazines, they look at other girls, and they think, ‘I want to be like her, why am I not like her?’ We’re not those kind of girls. We are unique. We relate to each other and we’re happy with how everybody looks. There’s nothing wrong with how anybody looks. That’s how I see it that we are very confident women and we want to show women that they can also be confident too about themselves.”

One of the issues Dollie Demi is acutely aware of is the treatment of female musicians in the industry.  Whether it’s the lack of opportunities, belittlement of their abilities or shaming of their confidence, sadly it’s something which remains all too rampant.

“It’s hard to be taken seriously as a woman in a male-dominated industry to be honest,” explains Mia. “The amount of times even other women in the music industry just over-explain things that I already know, is just a bit ridiculous. … There needs to be a mindset that the whole music industry needs to just get out of.  It’s just a bit ridiculous that in 2019 that we’re still getting these comments and everything.”

“We could put up with it, but we’re not standing for it.”

And there are other issues.  “I recently have had some quite rude sexual comments from labels,” Demi tells us.  I was like, ‘Do not talk to me like that.’ Literately that’s how I am. I’m very good. I don’t doubt myself or get uptight about it but I feel like it just shows that the industry is still the same. It’s disappointing for women.  That’s how it feels but that’s what we’re trying to show. We could put up with it, but we’re not standing for it.”

Meanwhile Ella has faced repeated utterances that she can’t be the guitarist, but must be the vocalist or the girlfriend of a band member on the lineup.  “I suppose it’s just because it’s not as common at the moment, but I know that’s changing. I don’t take offence. I just correct them, ‘Well, actually no.’” she says.

As they discuss the various issues they are confronted with, they also mention the physical aspect.  “…their hands on you without warning or any indication that that’s okay” laments Mia. “It’s just a bit like you wouldn’t do that in the workplace. If you did you’d get a complaint filed against you. … it’s just a bit ridiculous that people take the piss with that, to be honest.”

Despite this, Dollie Demi are upbeat and determined  “I’m going to carry on with what I’m going to do because we’re going to show the world that we’re a band and we are willing to dominate” says Ella.

But it’s not just in the industry that these problems rear their head.  It’s a societal issue, they explain.  “In society, it needs to change,” states Demi.  “If I go and watch a band, a female band, everyone assumes they’re going to some kind of punk riot band. If people go and see a boy band, they’re’ like, ‘What genre do you do?’ They always get asked, we don’t. We just get, ‘You must be a riot band.’ I’m not offended,but at the same time I do feel like society needs to change. If we’re all females, we should be the same as any band. That we should be asked what our genre is without it being assumed.”

But don’t refer to the genre as female fronted, as Mia explains “It’s just not a genre.  It doesn’t explain what the sound is at all.” 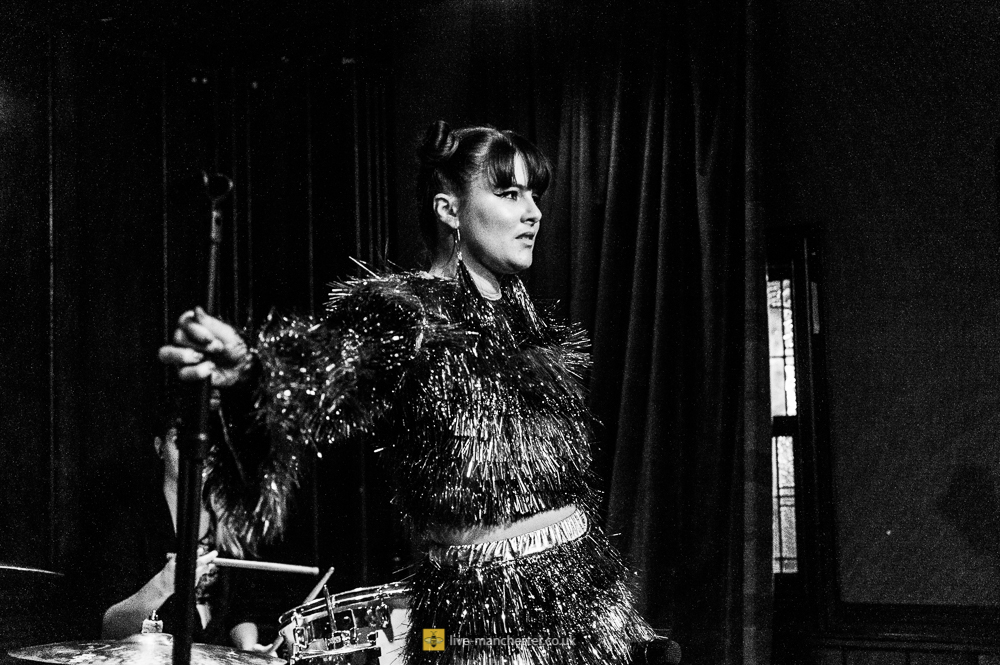 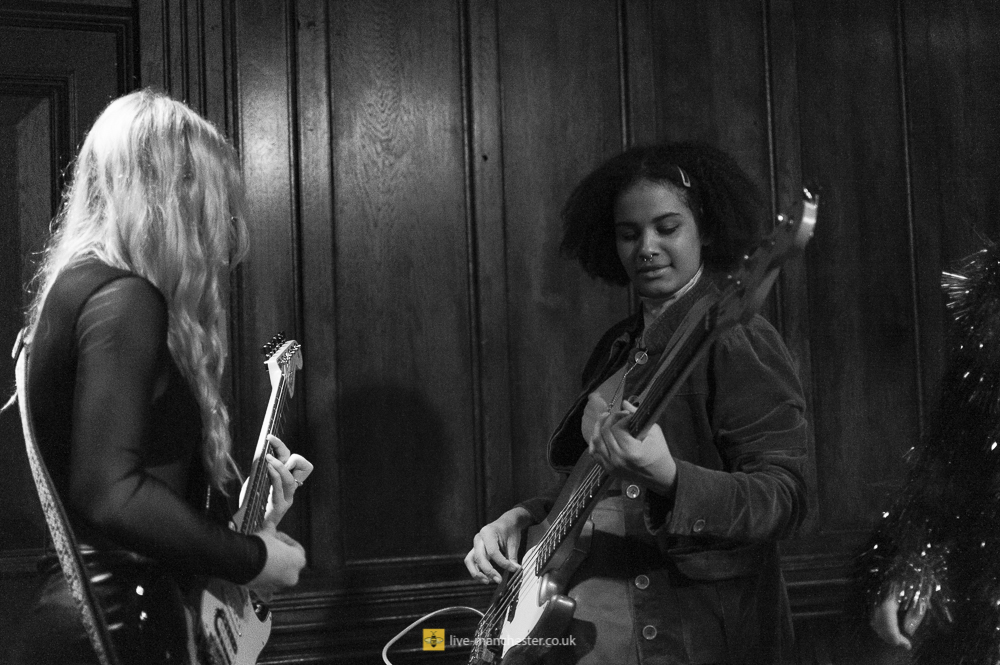 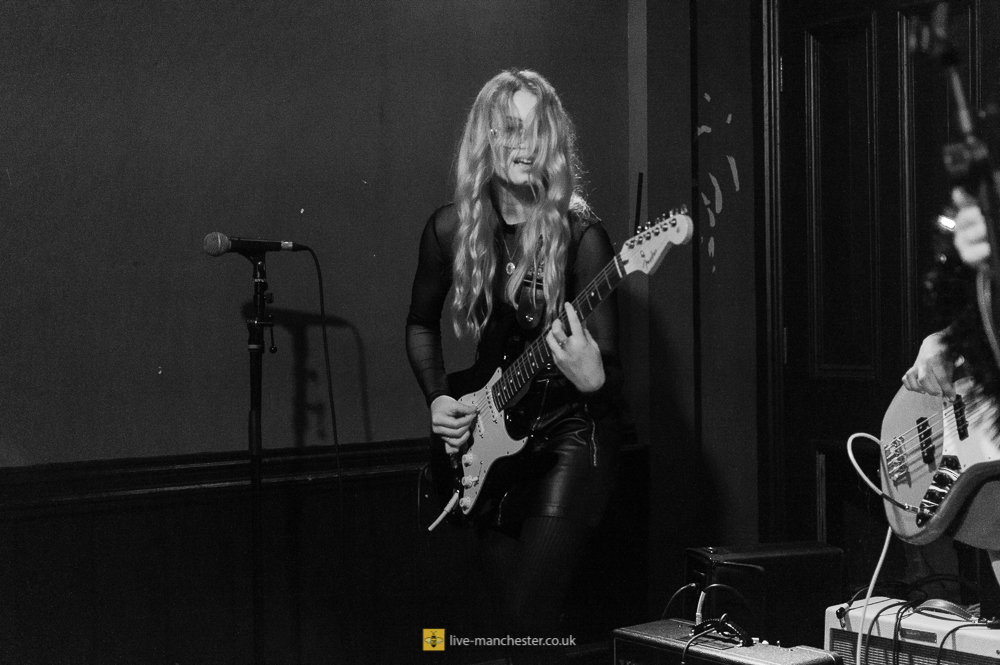 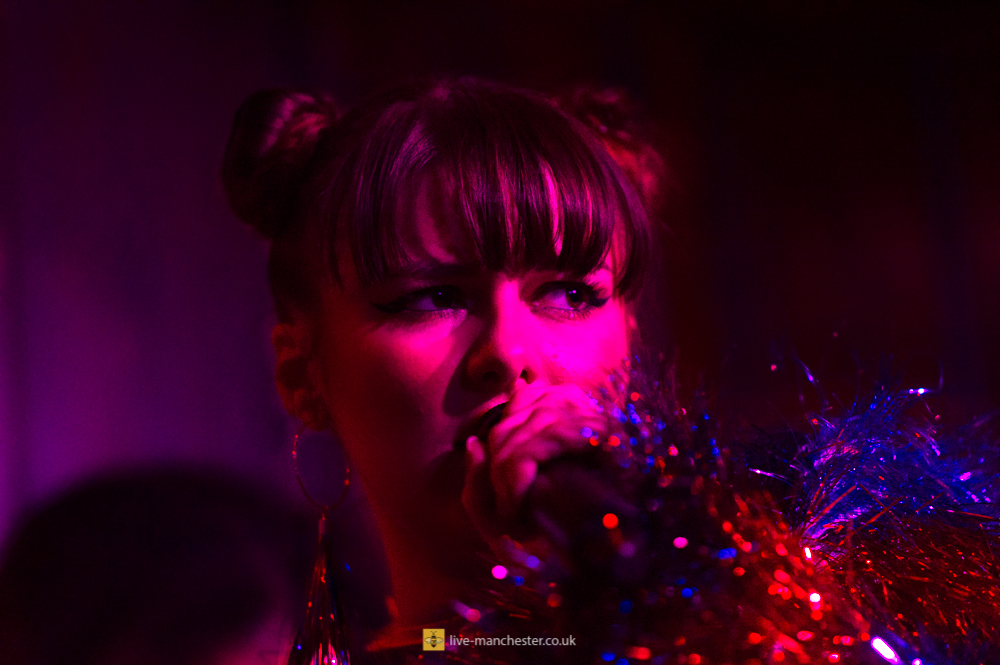 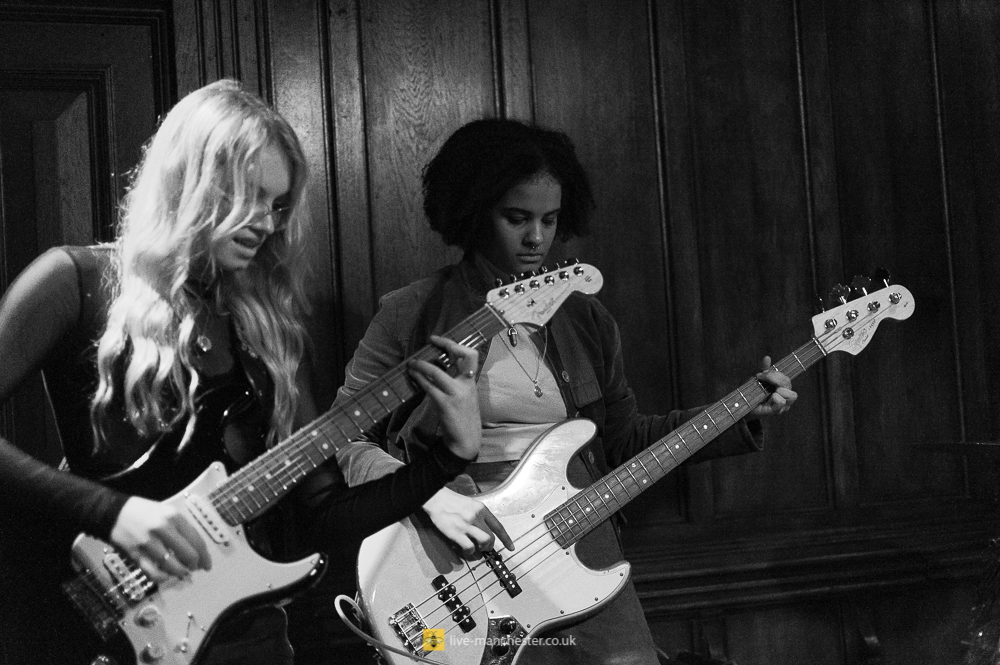 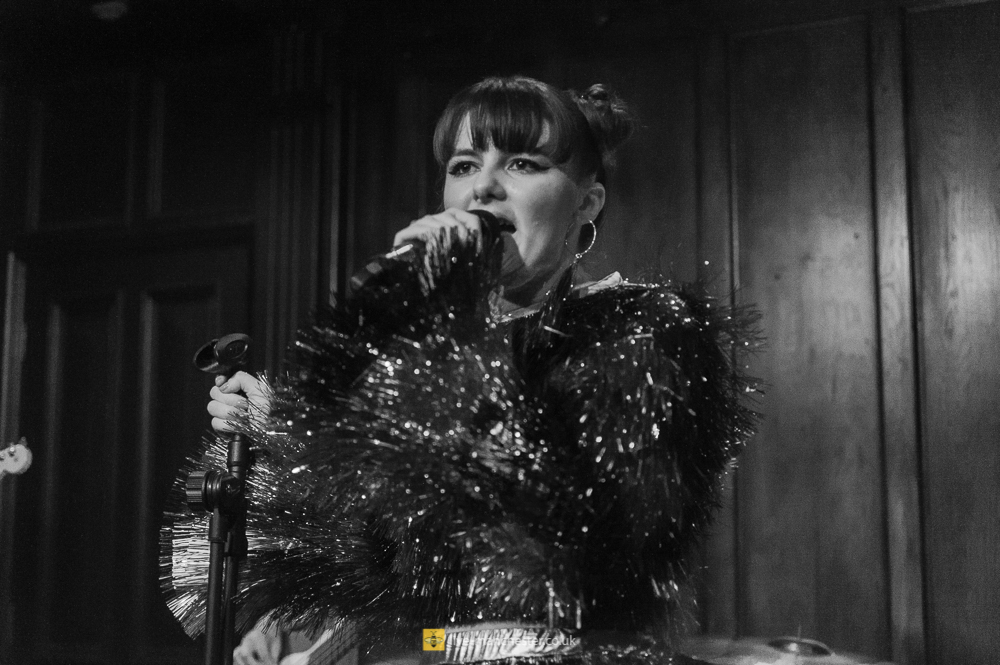 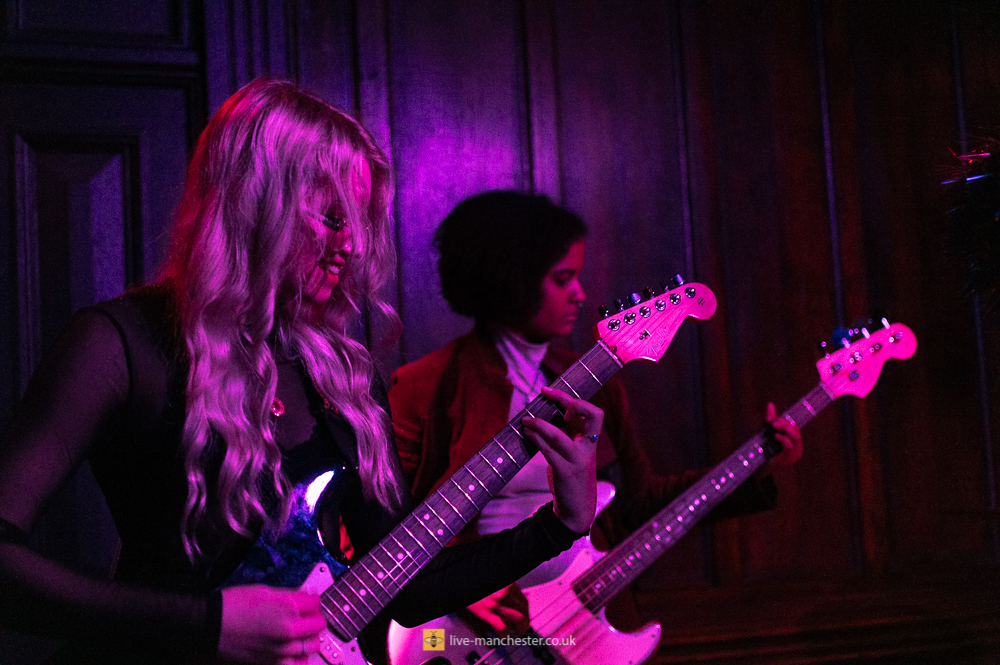 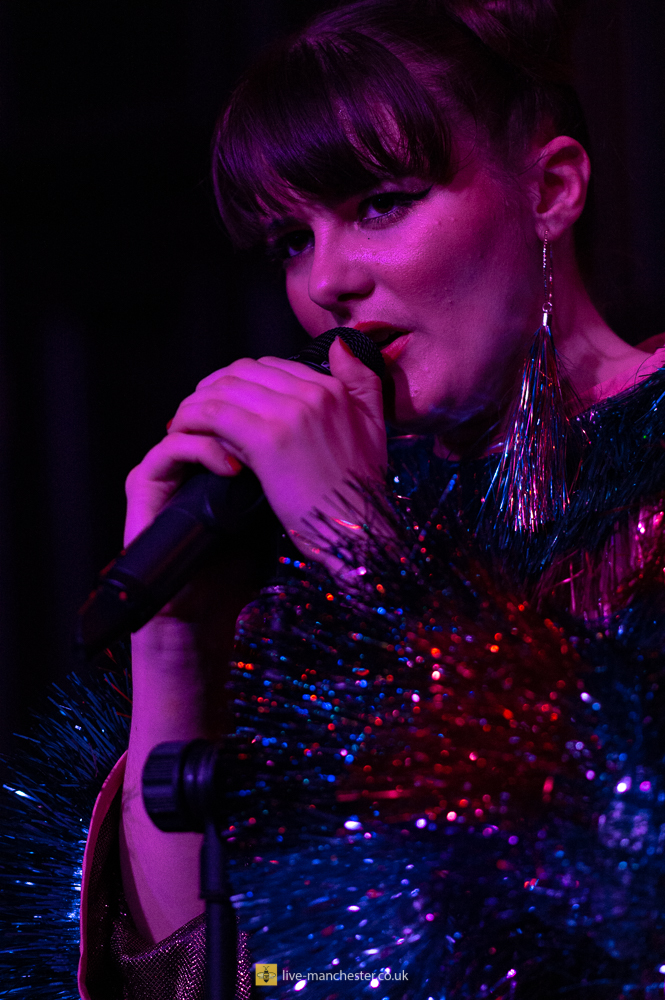 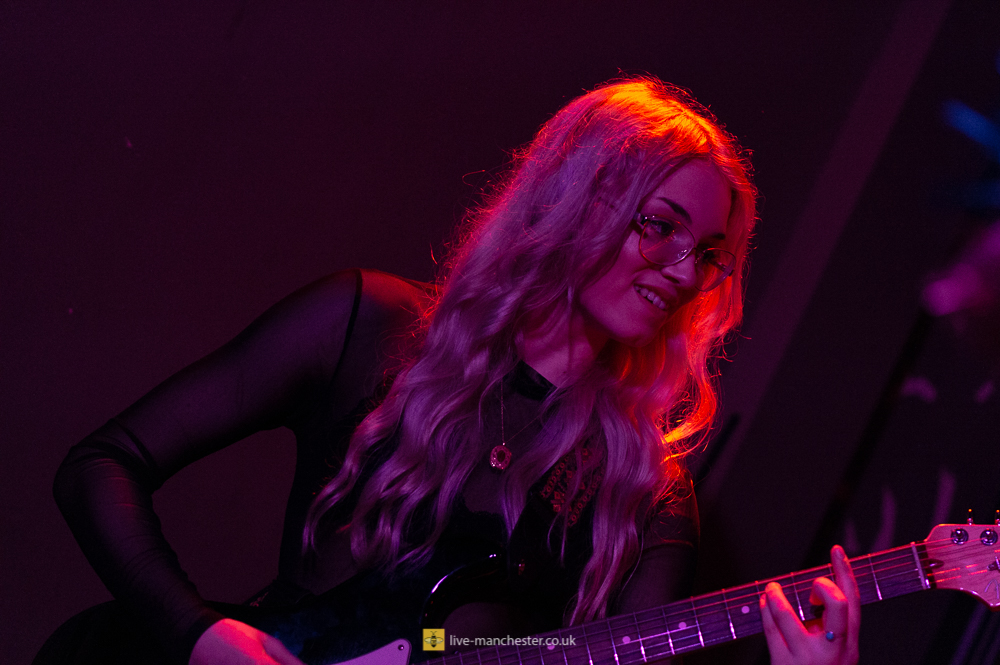 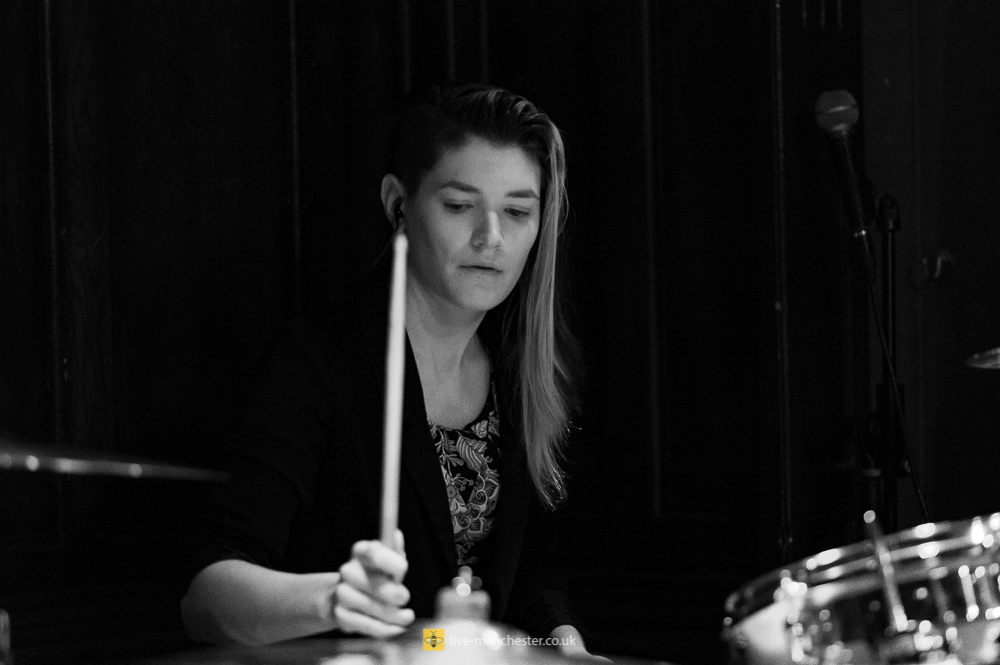 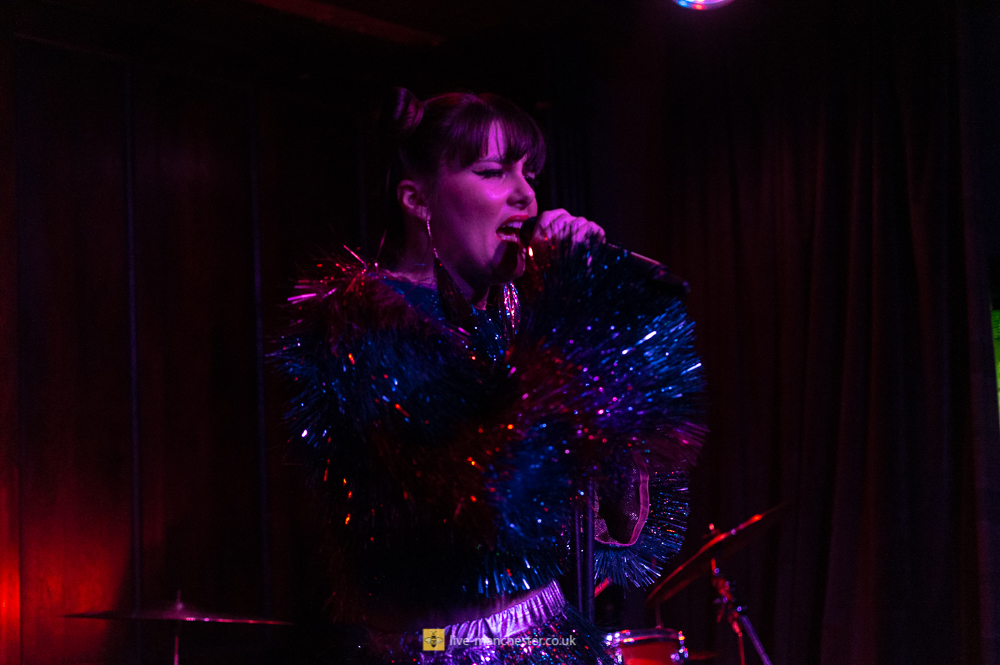 They do feel, however, that things may be improving.  They applaud the changing music scene, saying that they no longer feel as out of place on a line-up as they used to.  And they also see it as a challenge, “When we’re on a line-up with boys, I make sure we kick ass,” laughs Ella, “That’s what I make sure, we kick ass! We just go for it really.”  They point to changing festival line ups as an indication that things are thankfully moving in the right direction.

To compete in what remains an all-too-often imbalanced industry, they certainly need confidence – and they have lots of it..  “We don’t want to seem up our own arses, but I think we’re pretty cool … sometimes,” jokes Mia.  It’s an endearing confidence, always checked with humour, but one which they take on stage with them too.

We ask them how they feed these emotions and challenges in to their songwriting.  “By not giving a fuck,” declares Mia, before she laughs.  Demi continues, “I’ll usually go through experiences that are just not typical or have not been the best of experiences and I just write it down. I’m like that’s what happened. My songs are very genuine.”  She explains how her emotions feed her songs and how this in turn feeds their live shows, “I just wrote a load of lyrics about the way I feel and I just see it as a thing when I’m on stage, I am so passionate about it. It really, really gets me going.”

Throughout our chat, the camaraderie between the band members is strikingly obvious.  Mia and Gabby joined the band slightly later as the line-up changed a little.  But the quartet clearly gel on stage and off.  “We’re just strong girls and we just believe in each other” proclaims Demi. “We believe in everybody!”

They are constantly laughing and joking, jesting but at the same time praising each other, building one another up and defending their co-band members.

“We’re in the process of writing new songs.”

As we move back on to influences and writing processes, they start to elaborate on their future plans.  Their plan is to release a single followed by an EP within the year.  “We’re in the process of writing new songs” enthuses Demi.  But there may also be a slight shift in direction, with new elements fusing with their current sound, reflecting the change in line up over the past year (when Mia and Gabby joined).  They chat about the songs they have already written with their excitement for them clear.  And they are already thinking about the launch gig, joking about having an Angels and Devils theme.

They speak more about the tracks they have already penned, mentioning Cigarette and Wake Up.   “We just want every song to feel that way [like a party], but we also have a message as well.” they explain.  “We haven’t got a specific message in all our songs, it’s not the same,” continues Demi, “I like to change it up a bit and some of the messages are quite discrete… a hidden meaning.”

When can you catch Dollie Demi live?

And they let slip that they have plenty of gigs to announce shortly, although they have to keep them under wraps.  But they do reveal details of a couple that they can already confirm (they’ll be supporting Nile Marr at Night and Day on 9 May 2019 and headlining at Liverpool’s Jacaranda Club on 15 June).  They’ve also been announced for Oktoberfest at Bowlers on 5 October 2019.  Dollie Demi also tease some other dates – they’ll be playing another Manchester gig in July and drop hints about a festival later in the year.

Find out more about Dollie Demi: