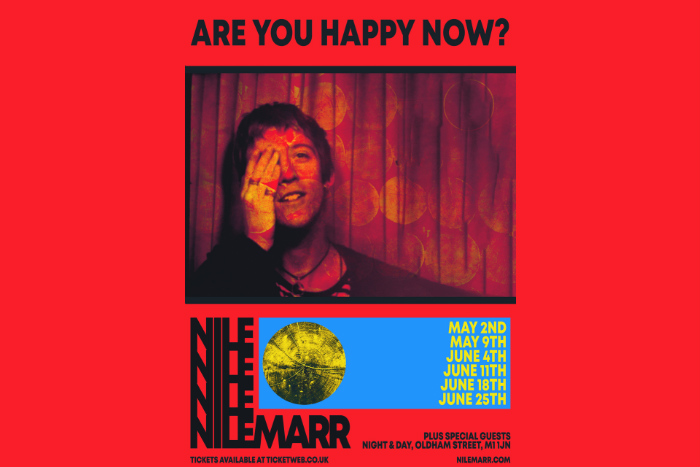 Nile Marr has announced a return to his Mancunian roots with a series of six shows at Night and Day ahead of his new album Are You Happy Now?

The 27-year old guitarist, singer and songwriter is Manchester born-and-bred, but has spent a number of years in Portland, Oregon.

His 2016 debut album TV Broke My Brain​ was released under the name Man Made and received widespread acclaim throughout the indie scene, on both sides of the Atlantic.  Man Made spent several years on the road, touring with the album.

New album Are You Happy Now? promises a collection of infectious melodies.  He explains, ​“I didn’t want to make sad music… I wanted to express how moving back to Manchester felt. My music is there for people who want a bit of melody in their day; I want them to hear the music and dance around and feel good about themselves”​.  The album was written in the space of 6 months, with Nile choosing to work in a room directly below a nightclub. ​“Creating something basically underneath a party was one of the most fun parts of making this record”​ he says. You can definitely feel that exuberance and positivity throughout ​“Are You Happy Now?”​.

The album was then recorded during a 10 day session at Eve Studios in Stockport with engineer Jim Spencer (New Order, The Charlatans).

From touring the UK club circuit with Man Made to playing massive arena shows around the world with Hans Zimmer, Nile Marr has garnered a wealth of live experience. Now he is now itching to take ​Are You Happy Now?​ on the road: ​“These days everything is set up for you to not leave your house, so if people have left the house to come and see you play you have to treasure that. You have to work for that. If you treat your audience with that level of respect, then I think you’re already setting yourself up for something good”

When does Nile Marr perform at Night and Day?