Home announces visionary exhibition – Incidents of Travel in the Multiverse 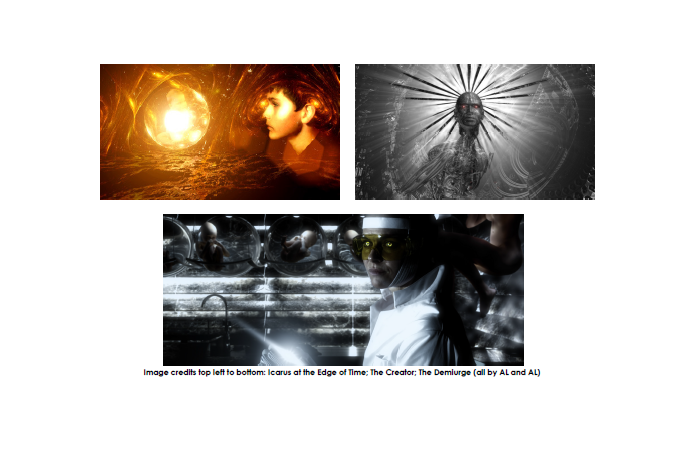 Home has announced that it is to host a major new solo exhibition of film, drawing, installation and live concert hall performance by British artist and filmmaker duo AL and AL.

The epic sci-fi odyssey entitled Incidents of Travel in the Multiverse investigates a new era of scientific exploration, both real and imagined, navigated and interpreted by AL and AL and includes a world premiere of The Demiurge.

The Multiverse, a scientific theory based on quantum mathematical reality, points to the probability that the universe may in fact be a small part of a much grander reality.  Inspired by this revolutionary concept, the artists have undertaken three Multiverse journeys across space and time, travelling from the atomic scale reality of DNA into the mind of thinking machines in the future who believe Alan Turing is their Creator, through to the point of no return at the edge of a black hole.

The first journey, Icarus at the Edge of Time, is a mesmerising re-imagining of the original myth, where Icarus travels not to the sun but to the edge of a black hole. Suitable for families, and based on the children’s novella by one of America’s most famous physicists, Professor Brian Greene, this ground-breaking concert hall spectacle brings Einstein’s theory of general relativity to visceral life. With a visionary film by AL and AL and an original score by renowned composer Philip Glass, Greene will narrate live in an exclusive North West premiere performance with the BBC Philharmonic on Saturday 6 February at the Royal Northern College of Music.

Originally commissioned by Cornerhouse and AND Festival in 2012 for the centenary of Alan Turing’s birth, the second journey, The Creator, sees thinking machines from the future travel back in time in search of their creator – Turing, father of the computer age, who sowed the seeds for artificial intelligence.

The third journey will feature the world premiere of The Demiurge, inspired by Francis Crick’s Panspermia theory on the origins of life, and the work of nanobiophysicist Bart Hoogenboom who created the world’s first ‘real’ images of DNA.  Starring a mesmeric performance by Sophie Linfield, The Demiurge travels across the universe on board a spaceship, populated by a thousand genetically modified female clones on a mission to find a cure for death.  Icarus at The Edge of Time, The Creator and The Demiurge will feature as installations in HOME’s gallery space.

Incidents of Travel in the Multiverse at Home takes place from 6 February until 10 April 2015.

In Review: Mysterious 44 at Halle St Peters
In Review: Return to the Forbidden Planet at the Palace Theatre
The Halle In November