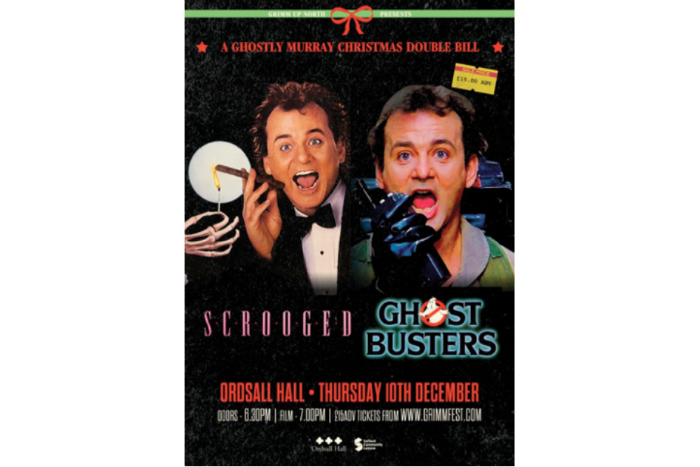 Grimm Up North have announced a ghostly Bill Murray Christmas Double Bill in the haunted Ordsall Hall on 10 December.

The Christmas screening will feature the ghostly comibation of Murray’s turn as Peter Venkman in the ectoplasm covered riot GHOST BUSTERS and SCROOGED, the modern retelling (for the 80’s, at least) of the Dicken’s classic in which Murray is haunted by multiple Christmas spirits in order to teach him lessons on life!

After the members of a team of scientists (Harold Ramis, Dan Aykroyd, Bill Murray) lose their cushy positions at a university in New York City, they decide to become “ghostbusters” to wage a high-tech battle with the supernatural for money. They stumble upon a gateway to another dimension, a doorway that will release evil upon the city. The Ghostbusters must now save New York from complete destruction.

In this modern take on Charles Dickens’ “A Christmas Carol,” Frank Cross (Bill Murray) is a wildly successful television executive whose cold ambition and curmudgeonly nature has driven away the love of his life, Claire Phillips (Karen Allen). But after firing a staff member, Eliot Loudermilk (Bobcat Goldthwait), on Christmas Eve, Frank is visited by a series of ghosts who give him a chance to re-evaluate his actions and right the wrongs of his past.

Ghostbusters and Scrooged are screened at the Ordsall Hall on 10 December.  Doors open at 6.30pm.  Tickets £15 available from www.grimmfest.com