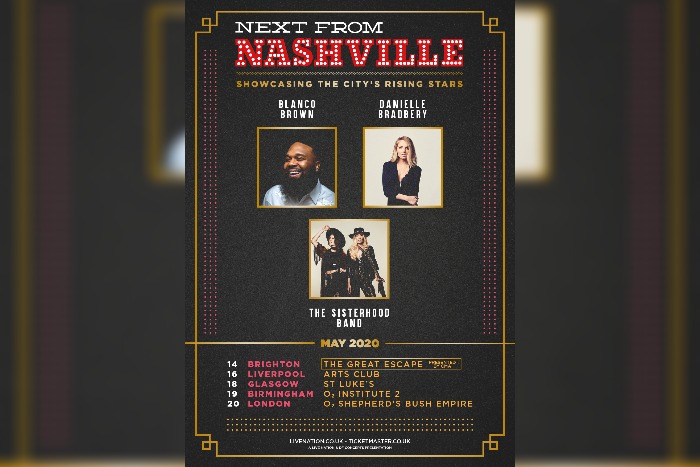 Next From Nashville, showcasing the city’s rising stars, is heading to Liverpool featuring Danielle Bradbery, Blanco Brown and The Sisterhood Band.

The showcase premieres at The Great Escape festival in May, presented by the Country Music Association, before four shows around the UK.

The event will run at Liverpool Arts Club on 16 May.

Blurring the lines between Country and hip-hop music, Blanco Brown makes a southern sound that he proudly calls “TrailerTrap”.  He draws on his two biggest musical influences – Johnny Cash and Outkast, drawing on country music and rap music, combining the two.  Speaking about returning to the UK, Blanco Brown commented, “I’m super excited to be playing in the UK again! Last time I was there I was so inspired and it motivated me to write a few songs, hopefully I get to share those with y’all sooner than later!”

ACM New Female Artist of the Year nominee and multi-faceted artist Danielle Bradbery recently featured on the Charlie’s Angels soundtrack alongside Ariana Grande, Normani, Nicki Minaj, Kim Petras and more. She re-introduced herself two years ago with sophomore album I Don’t Believe We’ve Met, having taken some time to hone her songwriting craft and establish a blend of her R&B, soul and country influences. Danielle has been fine-tuning her unique sound since getting her start winning Season 4 of NBC’s The Voice and achieved multiple ACM nominations as well as CMT Breakthrough Video of the Year and CMT Performance of the Year.

They are joined by The Sisterhood Band, a blend of the open melodies of classic West Coast folk and rock ‘n’ roll.  Having met whilst both working on solo careers Alyssa and Ruby bonded over a mutual love of Joni Mitchell and established a sound and style of their own.  The Sisterhood Band are set to release their debut album in 2020.

When does Next In Nashville take place in Liverpool?

When do tickets go on sale for Next In Nashville?

Tickets for Next In Nashville go on sale at 9am on Friday 28 February.