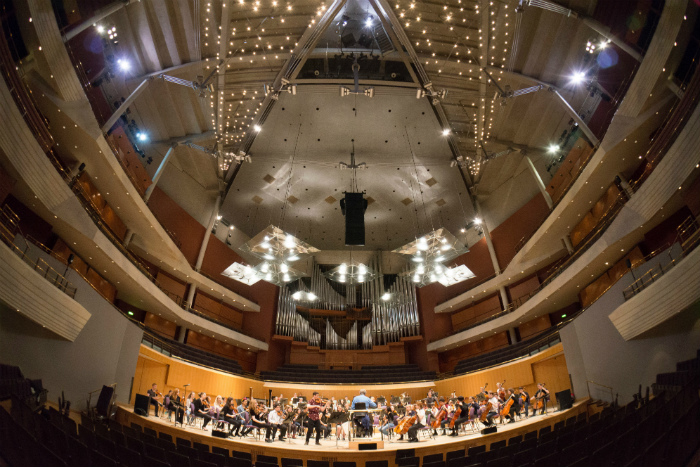 Chetham’s School of Music will become the first school orchestra to perform Gustav Mahler’s Symphony of a Thousand.  The performance will be the central event in a season marking 50 years since its formation as the country’s largest specialist music school.

Not only will the performance mark the end of term, and half a century of music, but the concert will also be the final show of the School’s Director of Music, Stephen Threlfall who leaves his role after 24 years.

Joined by guest choirs from Hereford, Leeds and Manchester, and with visiting soloists from across the world, the concert is expected to fill the venue with Mahler’s vision of ‘the whole universe ringing and resounding’. Among their audience will be the School’s Patron, HRH the Earl of Wessex, whilst the entire concert will be broadcast live on BBC Radio 3.

Chetham’s Orchestra and Chorus (made up of students aged 15-18) will be joined onstage by professional soloists including former student Kitty Whately, now a celebrated mezzo soprano.  The Chorus will also be boosted by voices from Leeds Festival Chorus, Poynton’s St George’s Singers and the choristers of Manchester and Hereford Cathedrals.  Young players from the Central Conservatory of Music in Beijing, and from Wells Cathedral School, as well as alumni from across the School’s 50 year history, will also boost the numbers onstage to fulfil Mahler’s colossal vision.

Chetham’s Principal Alun Jones said, “Chetham’s is a truly remarkable institution, filled with astonishingly talented young people, and this concert is testament to their dedication and musical ability. To the best of our knowledge, no other school has ever attempted Mahler’s ‘Symphony of a Thousand’, and perhaps no other school could – only here, in the country’s largest community of young musicians, is such a feat possible. It’s a fitting celebration of our Golden Anniversary, and also a triumphant send off for Stephen Threlfall, whose inspirational leadership over the past 24 years has ensured that our music programme remains truly at the forefront of music education.”

When will Chetham’s School of Music perform Mahler Symphony No. 8?

Chetham’s School of Music will perform Mahler’s Symphony No. 8 on Friday 5 July at The Bridgewater Hall, Manchester.

Image of Chetham’s at The Bridgewater Hall courtesy Tom Bangbala