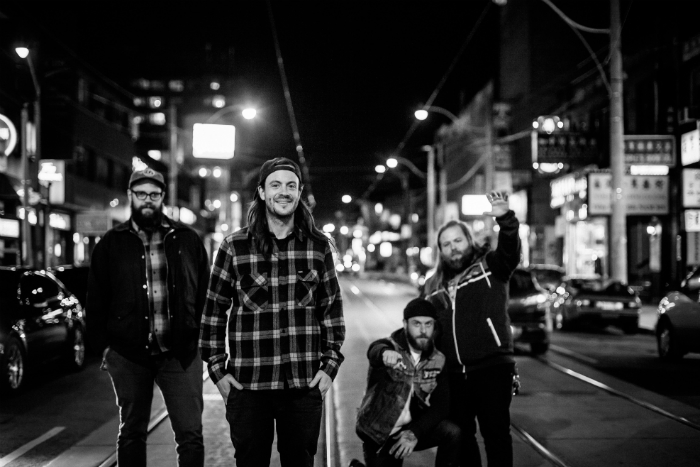 Canadian band Cancer Bats have announced a return to the UK for an 18-date tour in January 2016.  The tour follows their recent shows at Reading and Leeds festivals.

Earlier this year, Cancer Bats released their 5th album Searching For Zero, which was produced by legendary multi-platinum producer Ross Robinson (At The Drive-In, Slipknot, The Cure, Sepultura, glassjaw).  Searching For Zero is simultaneously the most melodic, yet menacing Cancer Bats release. The record incorporates the crude hardcore punk of their 2006 debut, Birthing The Giant and more metal leanings of 2008’s Hail Destroyer, while pushing the heavy hybrid sounds of 2010’s Mayors Bears Scraps and Bones and 2012’s darker Dead Set On Living to a new plateau. The choruses are hookier, the screams more savage, the riffs more vicious, the songs more powerful. This is Cancer Bats at their pinnacle – their “True Zero.”

Since first turning heads in 2006 with the release of their critically acclaimed debut, Cancer Bats, made up of lead vocalist Liam Cormier, guitarist Scott Middleton, drummer Mike Peters and bassist Jaye Schwarzer, have arduously and unrelentingly toured across the globe, averaging about 300 shows a year in both 2011 and 2012. Truly one of the hardest working bands in Canada, Cancer Bats have graced the covers and pages of countless tastemaking publications including Kerrang!, Exclaim!, Revolver, and Rock Sound and have been nominated for numerous awards from JUNO’s to Metal Hammer Golden Gods Awards.

Tickets for Cancer Bats performing at Manchester’s O2 Academy 3 on 23 January 2016 go on sale at 9am on Monday 7 September priced £11 plus booking fee.

In Interview: The Courtesans
In Review: Of Mice And Men at Manchester Academy
In Review: Marmozets and Lonely The Brave at The Deaf Institute