A host of musicals is coming to HOME Manchester 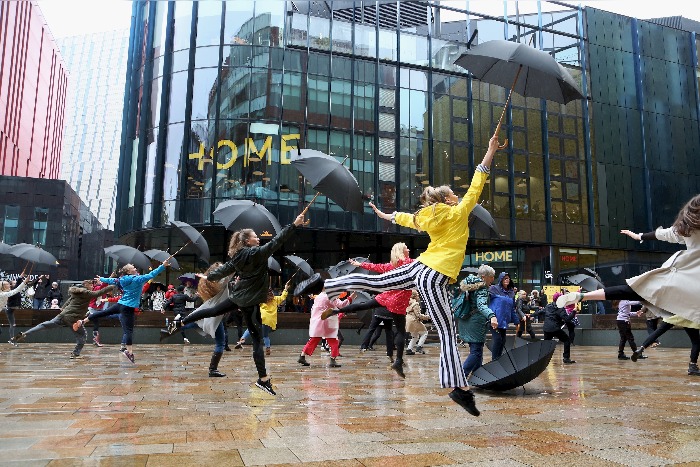 HOME Manchester will host the greatest show on screen season as a series of huge musicals comes to the First Street venue.

The season was announced over the weekend with a flashmob performance of Singin’ in the Rain outside HOME (yes, it was suitably rainy).

As part of the BFI’s Musicals: The Greatest Show on Screen and HOME’s year-long Celebrating Women in Global Cinema, there’ll be a particular focus on Betty Comden, the Oscar-nominated lyricist, librettist, screenwriter and actor who as one half of the musical comedy duo Comden and Green wrote some of the greatest musicals ever to grace the screen.  Screenings of her musicals include Singin’ in the Rain, On The Town, The Barkleys of Broadway, It’s Always Fair Weather, The Band Wagon and Bells Are Ringing.

There will also be a string of other musicals including Bob Fosse’s iconic Cabaret, starring Liza Minelli, Calamity Jane, and George Cukor’s A Star is Born.

The season will also feature a mini strand, The Backstage Musical: celebrating popular culture in times of struggle with three films choreographed by Busby Berkeley – 42nd Street, Footlight Parade and Gold Diggers of 1933.

Also screening will be The Umbrellas of Cherbourg and its followup, Les Demoiselles of Rochefort in which real-life sisters Catherine Deneuve and Françoise Dorléac play twins looking for love and excitement in their hometown.

BFI Musicals! The greatest show on screen also features Pakeezah, much loved by audiences for Meena Kumari’s turn as the doomed Sahibjaan, who is born in a graveyard to a dying mother who was once a famed courtesan.

BFI Musicals! The greatest show on screen runs at HOME from Sunday 1 December until Monday 30 December 2019.  Bigger Than Life’s Les demoiselles de Rochefort will screen on Tuesday 14 January and the Not Just Bollywood screening of Pakeezah on Sunday 16 January.

What is showing at BFI Musicals! The greatest show on screen at HOME Manchester?

First a Girl
Sunday 1 December 2019, 13.00
Directed by Victor Saville
This little-known British adaption of the 1933 German film Viktor und Viktoria (later remade as Victor Victoria and similarly reworked in Shakespeare in Love) sees a shop girl pretending to be a boy in order to perform onstage as a female impersonator.

A Star is Born
Sunday 8 December 2019, 17.00
Directed by George Cukor
George Cukor’s epic 1954 version of A Star is Born features an Oscar nominated Judy Garland and James Mason as the lovers on opposing ends of fame, and is widely considered one of the greatest musicals of all time.

Sing Along/ Calamity Jane
Saturday 14 December 2019, 18.00
Directed by David Butler
Calamity Jane is one of Doris Day’s best-loved films and a cult classic for queer audiences. Based on the life of real Wild West heroine and gunslinger, this hugely entertaining film won the Academy Award for Best Original Song (‘Secret Love’).
Remember to bring your singing voice with you as this film is also offered as a singalong version, ensuring your audiences will have a night to remember. Whip-crack-away!

Cabaret
Sunday 15 December 2019, 13.00
Directed by Bob Fosse
An iconic, incredibly stylish study of the hedonism and sexual ambiguity of pre-war Berlin, Cabaret was a huge, multi Oscar-winning hit for choreographer and director Bob Fosse in 1972 and made Liza Minnelli (who won Best Actress) a star.

The Umbrellas of Cherbourg
From Friday 20 December
Directed by Jacques Demy
Catherine Deneuve was launched to stardom by this dazzling musical heart-tugger from Jacques Demy. She plays an umbrella-shop owner’s delicate daughter, glowing with first love for a handsome garage mechanic. When the boy is shipped off to fight in Algeria, the two lovers must grow up quickly. Exquisitely designed in a kaleidoscope of colours, and told entirely through lilting songs by the great composer Michel Legrand, The Umbrellas of Cherbourg is one of the most revered and unorthodox movie musicals of all time. 4K restoration.

Cabin in the Sky
Saturday 21 December 2019, 15.40
Directed by Vincente Minnelli
With its all-black cast, MGM’s 1943 musical Cabin in the Sky provided a rare and invaluable showcase for some of the era’s most legendary African American performers. This Faustian fantasy stars Ethel Waters, Eddie ‘Rochester’ Anderson and Lena Horne in her first and only leading role in an MGM musical. Screening from a 35mm print.

Not Just Bollywood: Pakeezah
From Sunday 16 January
Directed by Kamal Amrohi
One of the most extraordinary musical melodramas ever made, Pakeezah is much beloved by audiences for Meena Kumari’s breathtakingly tragic turn as the doomed Sahibjaan, who is born in a graveyard to a dying mother who was once a famed courtesan.

Betty Comden and the Hollywood Musical
As part of HOME’s celebration of women’s contribution to world cinema, we salute the work of twice Oscar nominated writer Betty Comden. In collaboration with her writing partner Adolph Green, Comden was a leading figure on Broadway and a major contributor to some of Hollywood’s most loved musicals. This season offers the opportunity to come along and enjoy some of the most striking and innovative Hollywood musicals of the post-war era.

On the Town
Sunday 22 December 2019, 15.30
Directed by Gene Kelly, Stanley Donen
“New York, New York, a wonderful town. The Bronx is up but the Battery’s down”. Written by Adolph Green and Betty Comden and directed by Gene Kelly and Stanley Donen, On the Town, is undoubtedly one of the landmark Hollywood musicals of all time not least for its innovative location shooting.

The Barkleys of Broadway
Monday 23 December 2019, 15.50
Directed by Charles Walters
The film that saw Astaire and Rogers re-united on screen after 10 years apart. As with many of the scripts that involved Betty Comden, The Barkleys of Broadway brings together an unbridled celebration of American popular forms with a sharp critique of the potential snobbishness of European high-art.

It’s Always Fair Weather
Friday 27 December 2019, 18.10
Directed by Gene Kelly, Stanley Donen
Another classic from the imagination of Betty Comden and Adolph Green, It’s Always Fair Weather follows the adventures of three GIs after they leave the army in 1945. The film was envisaged as a sequel of sorts to On the Town and directed again by Kelly and Stanley Donen in their last collaboration for MGM. 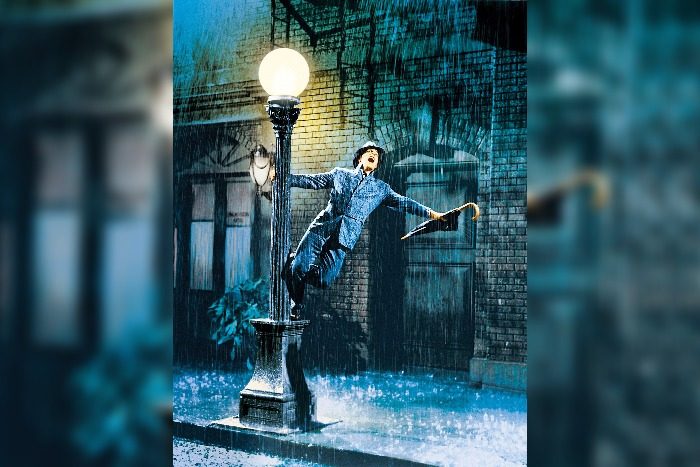 Manchester musicals – Singin in the Rain at HOME Manchester

Singin’ in the Rain
Saturday 28 December 2019, 18.10
Directed by Gene Kelly, Stanley Donen
Typical of a Betty Comden and Adolph Green script, in Singin’ in the Rain the spontaneous nature of musical performance is hamstrung by technology, here the introduction of sound in the film industry. Singin’ in the Rain is one of the greatest Hollywood films of all time.

The Band Wagon
Sunday 29 December 2019, 15.40
Directed by Vincente Minnelli
A major musical from the 1950s and a great example of Comden and Green’s interest in the contrast between popular forms such as the musical theatre and the pretentiousness of dramatic theatre. Fred Astaire plays a musical star who has to reconnect with the uninhibited nature of song and dance. That’s Entertainment indeed!

Bells are Ringing
Monday 30 December 2019, 17.50
Directed by Vincente Minnelli
Comden and Green contribute book and lyrics to this film adaptation of their 1956 Broadway hit. Directed by Vincente Minnelli, Judy Holliday reprises her Tony award winning role as Ella, a switchboard operator, in a plot that involves an array of amusingly confusing interactions between her and those who use her service Susanswerphone.

The Backstage Musical: celebrating popular culture in times of struggle
During the 1930s, in the days before the Hays Code, the musical genre in Hollywood offered a space for film-makers to engage with social issues of the day – most importantly, and urgently, the economic depression that blighted many people’s lives and forced people to make difficult December isions to survive. All three films feature the choreography of Busby Berkeley.

Gold Diggers of 1933
Wednesday 11 December 2019, 18.10
Directed by Mervyn LeRoy
Busby Berkeley worked with director Mervyn LeRoy to create another classic Hollywood back-stage musical. Based on a successful Broadway show, Gold Diggers of 1933 follows the adventures of four aspiring female actors who will go to almost any ends to find fame or fortune.