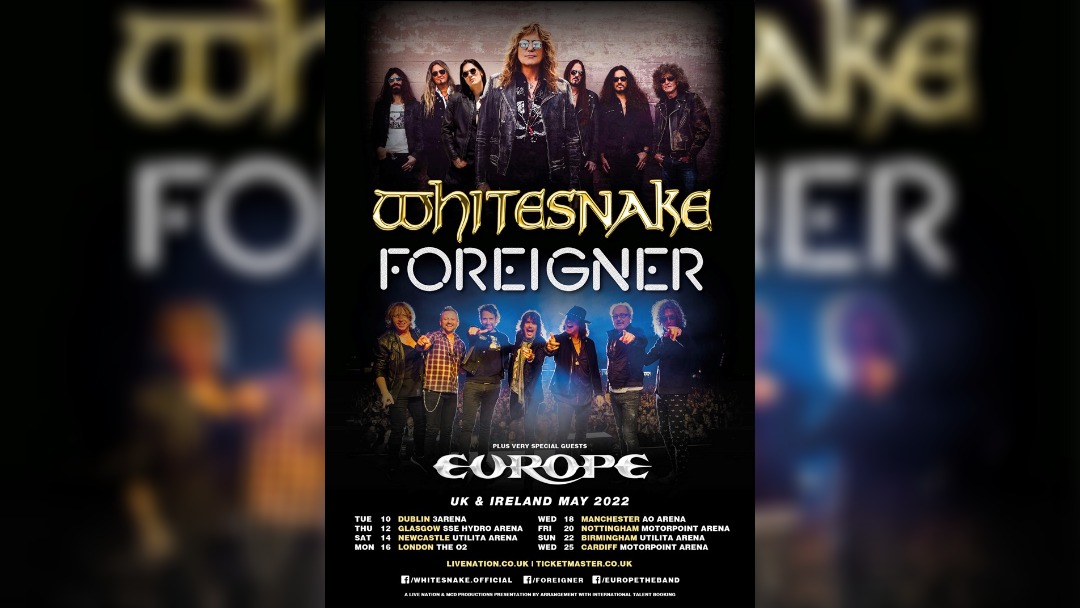 Whitesnake and Foreigner have announced a UK and Ireland tour for 2022 including a Manchester gig at Manchester Arena.  The tour also includes Europe as special guests.

The legendary artists have announced 8 dates across the UK and Ireland opening at Dublin’s 3Arena and including a massive show at London’s O2 Arena as well as Manchester’s AO Arena.

Speaking about the tour, Whitesnake’s David Coverdale said, “After all the extraordinary challenges we’ve been through together over the last year & a half, I am beyond excited to be able to announce our 2022 UK dates!!! I pray every day we can all make this happen & once again, share unforgettable evenings together & celebrate the amazing journey we have been on for almost 50 years!!! Boys & Girls…Whitesnake, Foreigner & Europe…It Doesn’t Get Any Better!!! Let’s Make This Night To Remember…& Let’s Make Some F@ckin’ Noise!!!”

Meanwhile Foreigner’s Mick Jones added, “We can’t wait to kick off the summer in the UK & Ireland with a massive tour alongside our friends Whitesnake and Europe. We’re looking forward to playing all our biggest hits for our fans, and rocking across the country.”

The announcement comes as Whitesnake build towards the release of a newly remastered and remixed deluxe edition of Restless Heart along with unreleased demos and studio outtakes.

When do Whitesnake, Foreigner and Europe perform at Manchester Arena?

When do tickets go on sale for Whitesnake and Foreigner at Manchester Arena?

Tickets for Whitesnake and Foreigner at Manchester Arena go on sale at 9am on Friday 30 July.