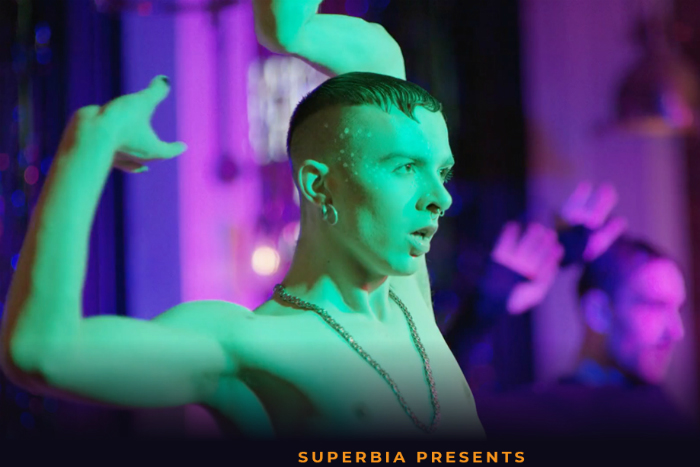 Now it its fourth year, the Superbia Weekend is an alcohol-free space offering three days of premieres, firsts, new work and LGBT+ celebrations as a cultural alternative to the hedonism of other elements of the festival.  The free to attend programme sims to support, curate, fund and celebrate LGBT+ life across Greater Manchester.

Opening on Friday 23 August and closing on Sunday 25 August, Superbia takes place at various venues across Manchester including No 70 Oxford Road and The Refuge.

Kicking off the celebrations will be an exclusive screening of ‘Beyond “There’s Always A Black Issue, Dear..”’ – a short film surrounding insight on growing up black and queer in 1970s Britain. Starting at 7pm in The Refuge basement, the evening will also featuring Q&A with film director, Claire Lawrie and introduction to the Superbia Weekend from Project Manager, Greg Thorpe.

The Superbia Art Gallery featuring all LGBT+ Manchester artists was the most popular event of the Superbia Weekend 2018.  Hosted all weekend in No 70 Oxford Street it will showcase films, paintings, sculpture and live performance and, on Sunday night, will offer fans the chance to meet the artists.

Saturday is the host to a multitude of events taking place across No 70 Oxford Street (formerly the Cornerhouse), Manchester Central Library and The Refuge. Beginning the day with a post-parade party, the day transcends to exhibitions from the likes of Rainbow Noir, Cheddar Gorgeous and Heather Glazzard

The Rainbow Noir exhibition will be held at Manchester Central Library. The team behind it will march in the parade and will complete the display with the flags and banners created especially for the demonstration.  The installation will then run until the end of September.

The headline event is the North West premiere of “Deep In Vogue”, a compelling documentary into Manchester’s Vogue Ball scene and a journey of love, campassion and community developed in the black, gay ballrooms of 1980s New York. The resulting film is a compelling exploration of the internal politics of vogue culture, and bigger issues such as the disenfranchisement of black youth, LGBT+ life, a shrinking welfare state, the death of art spaces, an increasingly reductive and commercialised gay scene and a lack of safe space for those who are truly different. The results are moving, dynamic, raw, powerful, funny and sexy.

The film, which features outstanding local talent was funded by a Superbia grant, first premiered at BFI Flare in March of this year and has since it has gone on to receive rave reviews. The exclusive event features performances from Honey Dijon and the House of Ghetto themselves. Meet the filmmakers and with a full-on afterparty of voguing and music from DJs Jae & Night and Lil’Fee & Veba.

The full line up for The Superbia Weekend in Manchester:

Post-Parade Party
No. 70 Oxford Street (Cafe), from 2.30pm
Music, café and art workshop for all ages.

Superbia Gallery
No. 70 Oxford Street (Exhibition Space), from 3pm
Exhibition of work from Manchester artists, including a specially-commissioned audio installation of bisexual poets reading their work, Heather Glazzard’s Queer Letters, Tom Quaye’s collection of digital work including ‘Queers of Manchester’, drag artisit Cheddar Gorgeous and a collection of make-up faceprints and many more.

Rainbow Noir Exhibition Launch
Manchester Central Library, 4.30pm­–6.30pm
Rainbow Noir, a group for and by queer people of colour in Manchester, launch of exhibition of materials including photographs, video, T-shirts, banners, flyers and more. The exhibition will be curated by Rainbow Noir member and artist/curator Leo Hermitt. The exhibition is due to launch directly after the Parade with marchers placing parade banners into the exhibition as the final pieces. There will be launch speeches followed by a catered West Indian buffet in the Function Room.
For anyone who misses the event over the course of the weekend, the exhibition to run until the end of September.

South and Central American Queer Film
No. 70 Oxford Street (Cinema) 4.30pm–5.30pm
Screening of ‘This Is My Face’ focusing on Chilean men living with HIV with introduction by filmmaker Angelica Cabezas, and ‘Carmen’, about a drag queen community in Panama, with an introduction by artist Humberto Velez who worked on the project.

Drag Queen Story Time with The Nightbus
No. 70 Oxford Street (Annexe), 5.15pm–6pm
The Nightbus reads for the kids! A theatre production aimed at young people, drag queen The Nightbus hosts a story time event to encourage people to ’embrace difference’. Drag Queen Story Time is inspired by a project created in San Francisco. It is exactly what it sounds like – a drag queen reading stories in libraries, schools and community spaces to help educate and imagine a world where people are not judged on their appearance or identity.

SMART Recovery Meeting
No. 70 Oxford Street (Quiet Space), 5pm–6-30pm
SMART Recovery is an international non-profit organization that provides assistance to individuals seeking abstinence from addictions. SMART is an acronym for Self-Management and Recovery Training. The group get together will include conversation, meditation and acupuncture and will be open to all.

‘Deep In Vogue’ Manchester Premiere and Performance Party
The Refuge Basement, 7pm–3am
Manchester premiere of the ‘Deep In Vogue’ documentary including two screenings, conversations with filmmakers, an appearance from documentary star Honey Dijon. The screenings will be followed by performances from House of Ghetto and local DJs.
Film screening: 9pm–10:30pm
After party with performances: 11pm–3am
Tickets – £5

An audience with Luke Turner
No. 70 Oxford Street (Café) 12.30pm–1.30pm
Author event with writer of ‘Out Of The Woods’, a ‘powerful bisexual memoir’. Hosted by Emily Metcalfe of Leeds Lit Festival.

Rebel Dyke Live
No. 70 Oxford Street (Cinema), 4.30pm–5.30pm
One woman show by Karen Fisch looking back at her life as a dyke activist, London drag king and notorious Rebel Dyke.