WATCH: Haiku Salut reveal video for The More and Moreness ahead of Manchester Deaf Institute gig 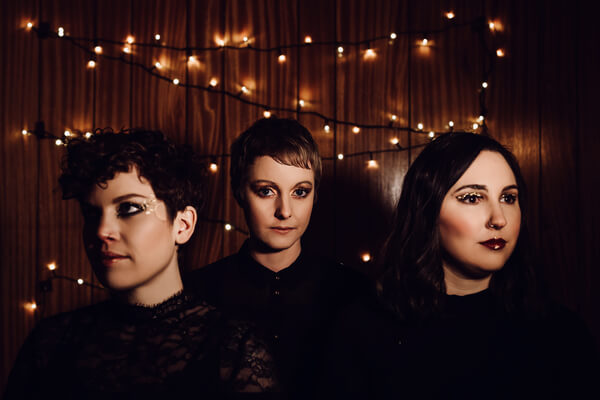 Haiku Salut have revealed the video for their new single The More and Moreness ahead of performing at Manchester’s Deaf Institute in September.

The reveal follows the announcement of their forthcoming album There Is No Elsewhere due for release on 7 September.

The track, the second single from the album, sees the Derbyshire trio working again with Glastonbury Brass, interweaving electronic and brass band.

Haiku Salut’s Sophie Barkerwood commented, “The More and Moreness started life as the soundtrack for an ice-cream van on the North-West coast. We were asked to write something illuminating for a travelling art exhibit and the bones of this song are it. It used to have a whole different twinkly introduction. A dead music box, in a dreary seaside town, coming back to life. The end section with the accordion loops and the brass band were written very quickly, I barely remember how that came together. One day it wasn’t there and then it was, in all its moreness.

“In January 2017 we travelled to Somerset to record the brass sections with Glastonbury Brass, they were amazing to work with. Brass band in winter, a feeling I can’t quite place, belonging or pride? We went for a drink with a few of them afterwards and it was warming to hear about their community.

“We wanted to continue the sense of belonging and solidarity in the video and decided to work with with our longtime friend and collaborator James Machin from Grawl!x. The video is an inky dark noir, we play a group of revolutionaries working together to bring an explosive change to the World. Much like the brass band, the revolution is bigger than the sum of its parts.”

When do Haiku Salut headline at the Deaf Institute?

Haiku Salut’s Manchester gig at the Deaf Institute is on 27 September 2018.