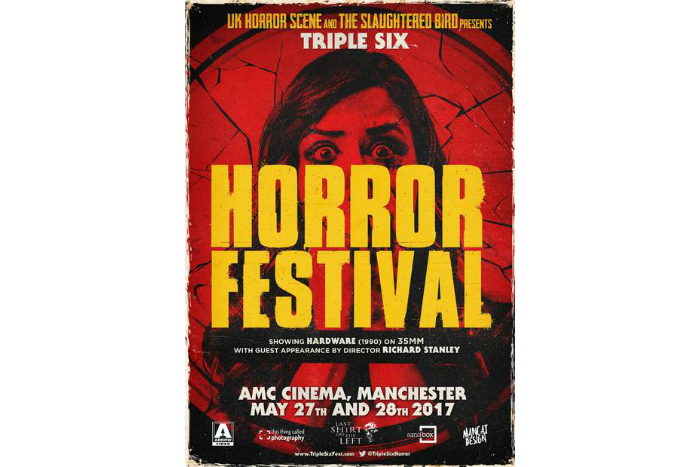 The Triple Six Horror Film Festival 2017 has revealed it’s full line-up for 27 and 28 May at Manchester’s AMC Cinema.

Triple Six is a new international film festival that aims to celebrate everything that is great in new independent horror filmmaking . Showing 9 features and 12 shorts over two days at the AMC cinema complex in Manchester, Triple Six has films from around the world while also having a British backbone throughout.

Saturday 27 May:
Hardware (1990) in 35mm followed by live Q&A with Richard Stanley.
Quarries (2016) European Premiere – Nils Taylor’s horror where a group of women on a wilderness expedition are stalked 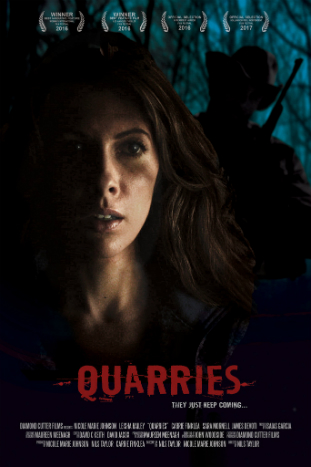 Unkindness of Ravens (2016) – director Lawrie Brewster’s third feature follows. Ravens follows the story of a homeless veteran who battles his
demons in the Scottish Highlands.
Forest of Lost Souls (2016) UK Premiere – Filmed in black and white this story of suicide, love, loss and more is a Portuguese slow burn horror from director Jose Pedro Lopez

Sunday 28 May:
The Chair (2016) UK Premiere – Director Chad Ferrin’s feature in based on Peter Simeti’s graphic novel telling the story of a man on death row fighting to survive.
Cruel Summer (2016) – Starring Emmerdale’s Danny Miller, Cruel Summer shows how one decision can change lives and is a truly haunting tale based in a single day

Tone Death (2017) World Premiere –  A techno producer is followed by a
filmmaker as he attempts to invent a device that will send the consciousness of the listener to another level. When the experiments go horrifically wrong he goes to extreme levels to keep going and finding new volunteers.
Offensive (2016) Northern Premiere – The latest offering from director Jon Ford.  Set in rural France this full uncut version of Offensive follows a retired American couple who inherit a house on the proviso they live there for a year first.  In what seems a perfect and idyllic setting they soon find out the local youths might not be all they seem!
Hounds of Love (2016) English Premiere – A young woman is randomly abducted from a suburban street by a disturbed couple. As she observes the dynamic between her captors she quickly realises she must drive a wedge between them if she is to survive

As well as showing some amazing features Triple Six will also be showcasing some stunning short films from around the world and again with many UK films. Each feature will have at least one short before it to highlight the amazing talent in anything from 2 minutes to 18 minutes.

Triple Six Co-Director Andy Deen said “We are so thrilled that we can finally announce the full line-up for Triple Six. As genre fans myself and Chris have spent the last 9 months organising Triple Six and now can’t wait to get until the weekend of May 27 & 28 to sit with real horror fans and watch a weekend of stunning and diverse independent horror cinema. The highlight will of course be the 35mm screening of the seminal horror sci-fi classic Hardware (1990) and the live Q&A with Richard Stanley , but in reality there will be many highlights throughout the weekend as we have such sights to show you”.

Triple Six Co-Director Chris Barnes also added “The reasons behind starting Triple Six were our love for horror (both Andy and I run UK horror websites) but also we wanted to shine a blood red spotlight on the amazing talent in genre filmmaking. I mean when you look at the range of feature and short films we are showing you can see just what passion, vision and skill everyone involved in these films have. Also we are grateful to AMC Manchester as they have fully supported a new horror festival and have made us feel part of the family. Their knowledge and professionalism ensures we will have a smooth and stunning weekend of big screen horror – and I mean BIG SCREEN!!

The Triple Six Horror Film Festival 2017 takes place on 27 and 28 May at Manchester’s AMC Cinema in the Great Northern.  Full weekend tickets are on sale priced £30 available from http://triplesixfest.com/film-line-up/