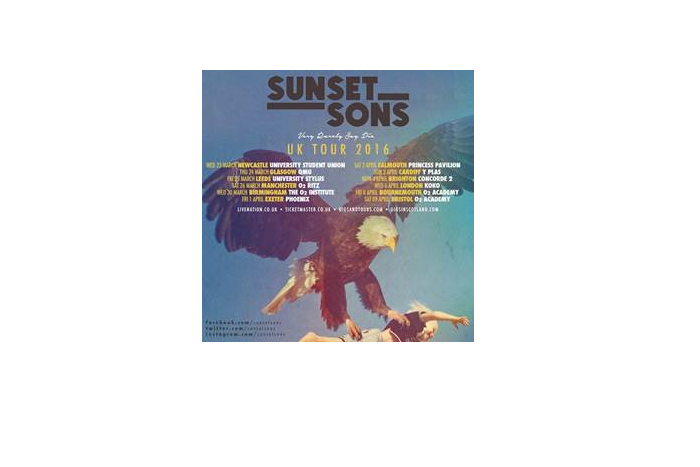 Sunset Sons have announced details of a UK and European album release tour for March and April 2016.  The tour will feature 14 UK and Ireland dates.

The tour is set to coincide with the release of Sunset Sons’ debut album Very Rarely Say Die which was recorded with Jacquire King (Kings of Leon), Catherine Marks (Wolf Alice) and James Lewis (Arctic Monkeys)

The announcement rounds off a blistering year for the Anglo-Aussie surfers, which has seen them play over 20 summer festival dates (Glastonbury, T In The Park, Isle of Wight, Boardmasters), secure Radio 1 (Track of The Day) and Radio X (Daytime Playlist) support, and win over hundreds of new fans, night after night across their current support slot opening up for Imagine Dragons throughout their European and UK tour run. Prior to that, the band embarked on a sold-out UK tour through the spring, which ended on a sold-out London Scala show – all none too shabby for a bunch of four surfers who fell into music as a means to pay the bills just two years previously.

The UK and Ireland tour listing:

Tickets for Sunset Sons performing at Manchester’s Ritz on 26 March 2016 are on sale now.

In Interview: Baskery
In Review: Treetop Flyers at Soup Kitchen
In Review: The Orielles at The Castle