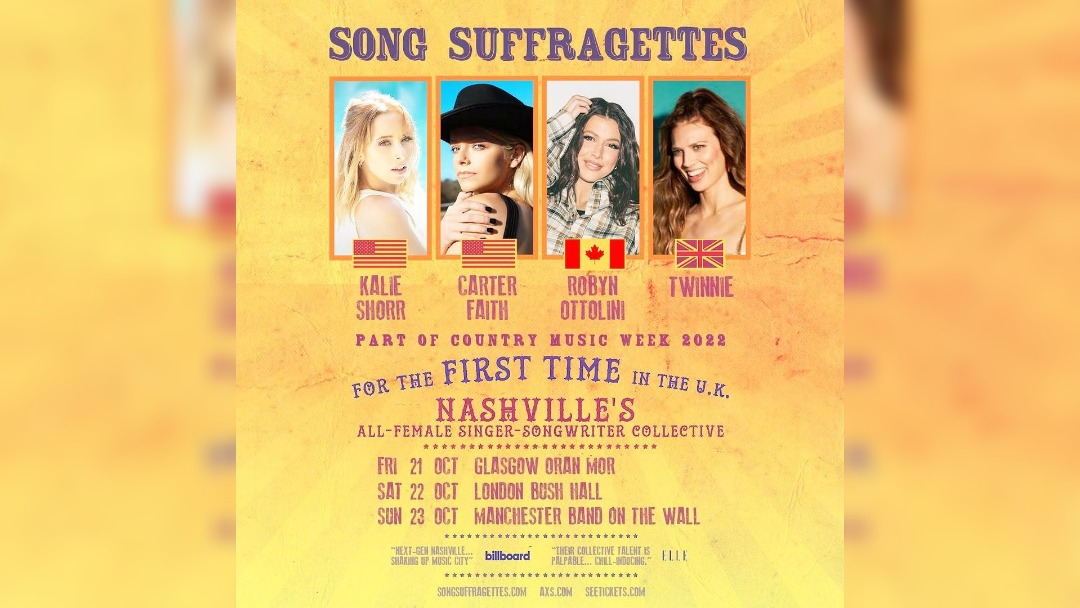 Song Suffragettes will perform a string of UK shows featuring Kalie Shorr, Carter Faith, Robyn Ottolini and Twinnie.  The Nashville all-female singer-songwriter collective will lead three UK shows as part of Country Music Week 2022 including a Manchester gig at Band on the Wall.

In over eight years, Song Suffragettes has become a Nashville music institution, known for its efforts to combat widespread gender disparity throughout the music community. Through its weekly show at Nashville’s The Listening Room Cafe, Song Suffragettes has showcased over 350 talented females, 26 of whom have gone on to secure recording contracts and more than 50 who have landed publishing deals.

Now Song Suffragettes will tour the UK with gigs in Glasgow, London and Manchester.

In Interview: Twinnie – “You can always tell what I’m feeling from the last song I’ve written”

Who will perform on Song Suffragettes UK tour?

Carter Faith – Dubbed the future of the next 10 years of Nashville by Apple Music’s Ward Guenther, Carter Faith combines the lyricism and perspective of Taylor Swift with the aesthetic and candor of Kacey Musgraves.  She has been tipped as one of the country artists to watch and received huge praise for her debut Ep Let Love Be Love.

Robyn Ottolini – An unapologetic star int he making, which brings absolute authenticity to her recordings and performances.  Whether she’s cursing, faking an orgasm, admitting to misdemeanours, or calling out a cheating ex, you’ll find it all in her catalogue of music.

Kalie Shorr – her debut album Open Book was name on a string of Best of lists for 2019 and followed on from her Grand Ole Opry debut in 2018.  She has repeatedly picked up critical acclaim from leading music writers and magazines.

Twinnie – UK artist Twinnie delivers a pop-country sound that is rooted in her Gypsy heritage.  Her album Hollywood Gypsy took inspiration from all around as she opened up with characteristic honesty.

When do Song Suffragettes headline at Manchester’s Band on the Wall?