In Interview: Twinnie – “You can always tell what I’m feeling from the last song I’ve written” 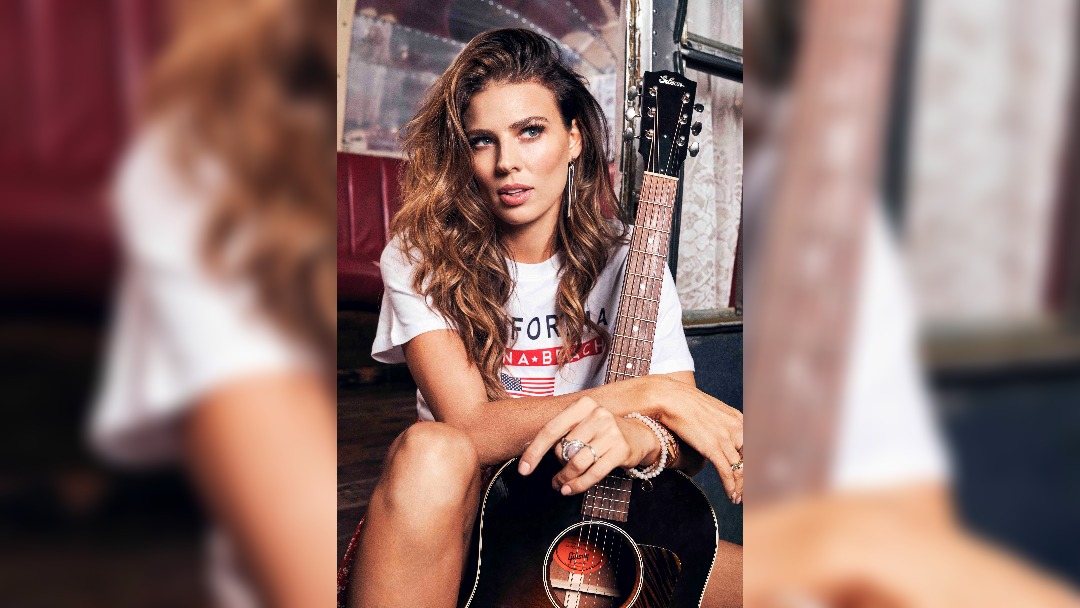 When the world came to an abrupt halt in early 2020, the music industry was hit hard.  Gigs were postponed and then postponed again, artists were dropped by labels, recording sessions cancelled, venues and promoters scrambled to hold things together and ride out the turmoil.  Sound engineers, photographers, tour managers, session musicians and countless others involved in the music industry found themselves cut loose.  In the midst of this Twinnie was due to release her debut album Hollywood Gypsy and head out on a UK tour to promote it.

But whilst the spread of Covid and restrictions denied her the opportunity to tour, Twinnie released the album and set out to make the most of what would be, for most, a very quiet 18 months.

Looking back at Hollywood Gypsy some 16 months later, Twinnie beams.  “I’m still really super proud of that album” she says, “And I feel like it really did represent everything that I’m about.  I got to showcase different parts of me, the different elements and inspirations that brought me up and I felt pretty good about it.”

“in order to write songs, you’ve got to live life”

The album saw Twinnie taking inspiration from all around.  Her approach to music remains that inspiration can hit you from anywhere at any time.  “It can come from anywhere … it comes from TV, movies, my life generally” she says, and that inspiration always finds her opening up and being honest with her music.  “You can always tell what I’m feeling from the last song I’ve written” she adds, “I generally draw on my own kind of experiences through like, oh, like, my friends are really interesting. And they’re always like, in some sort of drama. So I take a lot of inspiration from a couple of my friends in particular – just life stuff. I guess, in order to write songs, you’ve got to live life.  I try to live life as much as I can, because I’ll find that I’m more inspired that way.” And with inspiration all around, she’s often penning new material.  “I’m quite prolific” she continues, “It’s annoying, really, because I just can’t stop!  I like just telling stories and creating worlds. I feel like I constantly am doing that in my head. I’m just, I’m weird like that” she laughs, “I think, like, even when I’m just driving. You know, imagine my next music video. Concepts.”

With restrictions and lockdowns kicking in, however, Twinnie’s tour was cancelled before she could use to build momentum towards the album release.  “We were on a trajectory to do a big push, and then, you know, the whole world kind of stopped. It felt like it hurt less because it was happening to everyone. … but you only get one album release, one debut and I felt like a lot of those special moments were kind of robbed a little bit by the pandemic.”

Despite the loss of momentum and being stripped of her big release, Twinnie shows no regrets and speaks positively about releasing Hollywood Gypsy despite the global challenges.  “I’m glad we put it out because it give some joy to people and people. My fans were so lovely. And they wanted it. They’ve waited for a long time I went for a long time to get out. So yeah, all in all, it was, you know, overall, positive.”

It really did give me a lot of time to reflect on whether I wanted to keep on this trajectory?

It’s in the ensuing period, however, where Twinnie has really taken control, taking advantage of enforced downtime and new opportunities which have arisen.  It’s a time she has spent honing her sound, trying news things and pursuing the things she is most passionate about.  “It [lockdown] really did give me a lot of time to reflect on whether I wanted to keep on this trajectory. Do I like this? My sound? Do I, you know, what do I write about? We’ve been sat at home, but a lot has happened.  So I feel like within the 16 months I’ve moved on so much and grown so much as a person.”

Embracing the time and opportunities lockdown brought her, Twinnie set about re-recording the album in its entirety as an acoustic release and then later revisiting some of the tracks for a completely re-invented EP – the five track Hollywood Gypsy (Reimagined).  This brought its own challenges.  “I had to remember to stay away from the original melody!” she laughs, “I kept going back. I was like, ‘Oh, no, that was it’.” And then in subsequent live shows she admits she would find herself going in to the new melody.  But the results were outstanding.  The acoustic album and re-recorded EP were praised by fans and critics alike and some of the results took Twinnie by surprise.

The re-recording in particular came about with Twinnie keen to keep recording and giving more to her fans as well as showcasing the tracks in a different way.  “We [Twinnie and producer Barnabas Shaw] just got stuck in the studio and I was like, ‘you know, you hear a lot these days, with covers being reimagined why don’t I just reimagine my own songs just to see if it helps people hear the lyrics a little bit better. Maybe they’ll hit harder’.”

One of the tracks reimagined was Daddy Issues, which she openly admits is one of her personal favourites.  The change to the track was hugely effective.  “Daddy Issues is probably the one that I feel that is the most reimagined” she explains, “And all that what I’m doing is actually slowing that down. Because that really works is a ballad.”  The fresh look at the five tracks on the EP has also left her wondering which versions to play live she says, with Daddy Issues one she is particularly tempted to play in its new format.

The EP also fits into her belief in not labeling people, or indeed music.  Twinnie is often referred to as a country or country-pop artist, but Hollywood Gypsy (Reimagined) has allowed her to showcase different sounds and styles, fighting against restrictive labels.  “I don’t conform to any kind of genre.  I don’t feel like I do anyway.  There’s a bit of everything of my music.” she elaborates, “It was really kind of liberating and empowering.  It changes people’s perception of the song and the view.”

At the mention of live performances, I bring up her upcoming tour and the fact that she had just played a festival, her first show in quite some time.  “It was amazing. It really truly was amazing” she gushes, “… brushing off the cobwebs because it’s our first show back and it’s you know a festival show! I had a massive crowd. Everyone seemed to enjoy it.  It definitely feels like life is heading right back into the kind of chaoticness of tour life, which I don’t think I’m quite ready for yet” she laughs.

But in just a few weeks, her delayed headline tour launches.  “Yeah, it’s crazy. I’m so grateful to be able to do this job. But what blows my mind to think that somebody would pay money to come and watch me play.  I feel like I’ve got imposter syndrome. And then when people sing my songs back to me, I’m like, ‘What the hell is going on?’ Like, I created that and now people are singing it! I can’t describe the feeling. It’s the most surreal feeling ever. And it just makes me want to live in that moment and stay there forever.”

“I love the stage” she continues, “I’ve been on stage since I’ve been four years old. So I’m not scared of an audience. I love an audience and probably a bit too much actually.  … I’m so excited to be back on the road. Because I feel like that’s honestly where I shine the most. … I’m not very good on like social media and keeping up with all that kind of stuff. I can’t do it. So that’s where I’m looking forward to creating new friendships and relationships with fans.”

Joining Twinnie on her UK tour are US sister/brother duo Juna n Joey as well as a local artist at each venue as she seeks to open up opportunities for upcoming musicians.  “We got contacted through mutual friends in Nashville, so it’ll be special for them because it’s their first time in the UK. And I’ve also opened up a 20 minute slot to a local artist. So that’d be really lovely to have. You know people from that hometowns because there’s so many artists wanting just a shot to an opportunity to play and I know how frustrating that feeling is having my my own tour cancelled.”

There’s enough room for everyone

Twinnie is very keen on offering opportunities and support to upcoming artists and creatives which is something that feeds in to a global non-profit collaborative initiative she has co-founded, ‘I Know A Woman’.  “I should say, it’s, it’s not just for women” she explains about the initiative, “It’s a spotlight for women but men are in the music collective as well.  The non profit goes towards the music maker’s personal well-being so anything from financial struggles to especially mental health, because I feel like in this day and age, that it’s a big topic at the minute. All creatives have a brain that kind of struggles with that, because we’re always faced with a lot of rejection. And that is not normal. It’s not a normal lifestyle – a nine to five, it just isn’t. And I felt like the industry as a whole didn’t really support that much. And that was highlighted to me in the pandemic, through my own experience. So we are trying to standardize therapy within label and publishing deals and create HR access.”

Speaking more about the initiative, which promotes mental health alongside writing camps, live shows and awareness of the ins-and-outs of the music industry, Twinnie explains, “I am a very big believer in all ships rise together.  There’s enough room for everyone and all ships can rise together. And I really do believe that. And I think women are encouraged to feel competitive rather than collaborative. There’s a lot of statistics for women in many different industries, but especially in the music industry – more men get signed than women. And I was just like, on a whole, the music industry needs reforming. … My soul needed more [than success for her album and EP] – I wanted to be part of something bigger. And I just knew that there were so many people, amazing people that just weren’t even getting the shot. Or they didn’t have the opportunity, they were struggling, being creatively frustrated and not having an outlet. And I think that is so true, I really resonate towards that. And if I’m able to give people an opportunity, whether it’s to write or create a new friendship, because the music people, music, mentors that I’ve had have been other artists, and they have guided me, it’s called music business. And it’s called show business. … I want to be able to help educate artists especially because nowadays you can be an independent artist.”

When does Twinnie head out on tour?