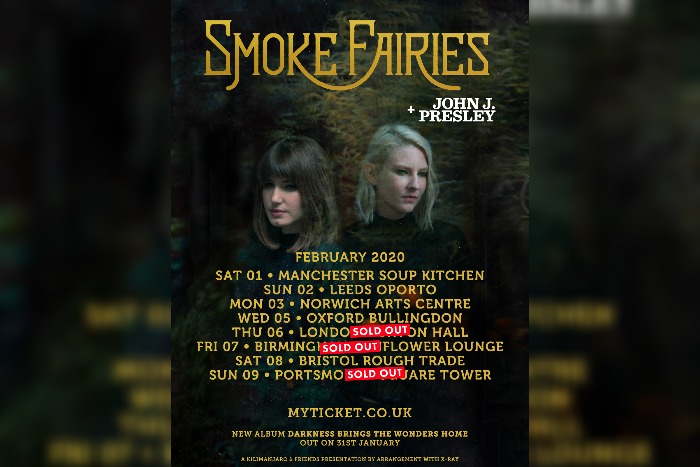 Smoke Fairies will open their first tour in four years with a Manchester gig at Soup Kitchen in February.

The duo of Jessica Davies and Katherine Blamire travelled to Seattle to record their upcoming new album Darkness Brings The Wonders Home.  The duo, who first met at school in England, worked with produced Phil Ek to record the album over a month-long period.  They adopted a purposely intimate approach to achieving a singular sonic tone.

Smoke Fairies were the first UK act to release a single on Jack White’s Third Man Records label – it was a single which was also produced by White who played guitar and drums on the track.  Smoke Fairies have also recorded a cover of Neil Young’s Alabama, and contributed vocals to the track Valentina, a tribute to Valentina Tereshkova, the first woman in space on The Race For Space, the second album by Public Service Broadcasting.

Their fourth album Darkness Brings The Wonders Home is due for release on 31 January 2020 ahead of the eight-date tour, which opens the following night.

When do Smoke Fairies headline at Manchester’s Soup Kitchen?