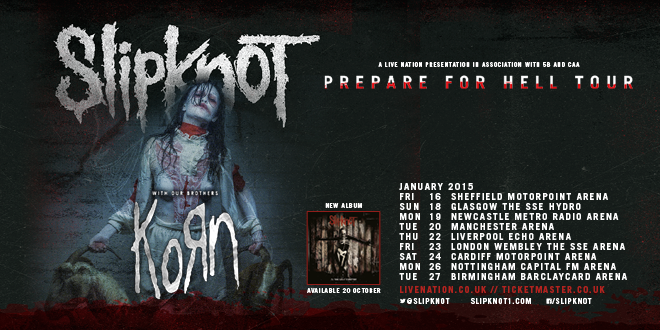 Multi-platinum selling, Grammy Award winners Slipknot have announced a UK tour which will see them make their long awaited return to Manchester in January 2015 on their Prepare For Hell tour.  They will be performing at the Manchester Arena on Tuesday 20th January 2015.

Frontman Corey Taylor commented “The UK has always been very special for us.  In a lot of ways, it’s where this insanity began.  So, for this tour, we decided to try and hit as many places as we could – not only England, but Scotland and Wales as well.  Technically Ireland is Europe, but we’re going there too.  We’re coming back for the people who started this for us: that would be YOU.  Prepare yourselves … Hell is coming”.

The announcement comes just one week before their latest album 5; The Gray Chapter is set to be released – their first new music in more than six years.

Joining Slipknot on tour will be special guests and longtime friends Korn, who have just celebrated the 20th anniversary of their phenomenally highly rated self-titled debut album.

An opening band is also set to be announced.

Tickets for Slipknot’s Prepare for Hell tour with Korn go on general sale on Friday 17th October at 9am priced £39.50 plus booking fee.  Special pre-sale begins on Tuesday 14th October via Slipknot’s website.