Previewed: The Von Trapps and Pink Martini at the Bridgewater Hall 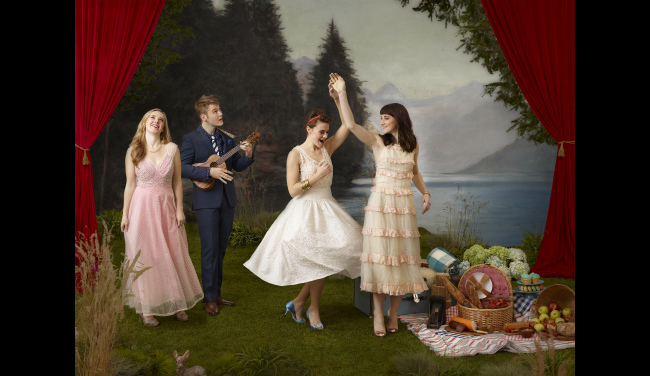 It’s set to be quite an evening at the Bridgewater Hall on Monday 3rd November as Pink Martini take to the stage with their original vocalist China Forbes with sublime vocalists The von Trapps opening.

Described as ‘somewhere between a 1930s Cuban dance orchestra, a classical chamber music ensemble, a Brazilian marching street band and Japanese film noir’, the 12-piece Pink Martini were founded by Thomas Lauderdale, a Harvard graduate and classically trained pianist, back in 1994 as a ‘little orchestra’ performing a cross-genre repertoire of classical, latin, jazz and pop music.  It’s a blend of music which has attracted a wide range of fans and made for a curious and tantalising fusion.

Pink Martini’s musicians have taken their multilingual performance all over the world, performing on stages and with symphony orchestras throughout Europe, the US, Asia, the Middle East and South America, including multiple performances alongside the Los Angeles Philharmonic and the BBC Concert Orchestra at the Royal Albert Hall.

It was the production of their recent album, Get Happy, (released just over a year ago) and featuring their original vocalist China Forbes with special guests including Rufus Wainwright and Ari Shapiro which brought them into contact with The von Trapps, who are set to make their return to Manchester following their excellent performance at the Royal Northern College of Music back in May.

It’s a near impossibility for the name von Trapp not to evoke thoughts of The Sound of Music (you’ve got the tune going around your head now haven’t you?), of the family escaping Austria, moving to the United States and showing their musical talents to the world during two decades of touring.  The family history is certainly kept alive by the incredibly talented Sofi, Melanie, Amanda and August von Trapp, the great grandchilden of the Captain and Maria von Trapp who have now been performing as a group and wowing audiences for the last twelve years (all the more remarkable considering they are still only aged from their late teens to mid-20s), also touring the world to sell out audiences and critical acclaim.  With performances in such iconic venues as the Sydney Opera House, The Forbidden City in Beijing, the Hollywood Bowl and Carnegie Hall they have certainly made an impact and ensuring that the beloved and infamous von Trapp name stays firmly embedded in musical consciousness, although in a slightly updated fashion (gone are the Lederhosen!)

The von Trapp’s and Pink Martini released a full collaboration album, Dream A Little Dream – a collection of off-centre 21st century vocal harmonies – earlier in 2014.  It was an album which saw the von Trapps fronting the ‘little orchestra’ of Pink Martini to produce a brilliant 15 track offering which features musical inspirations from around the world as well as guest appearances from The Chieftains, Wayne Newton, “Jungle” Jack Hanna and Charmian Carr (Liesl in the original Sound of Music).

Pink Martini, with vocalist China Forbes, perform at The Bridgewater Hall in Manchester on Monday 3rd November 2014 with support from The von Trapps.  Tickets £29-£23.  7.30pm.