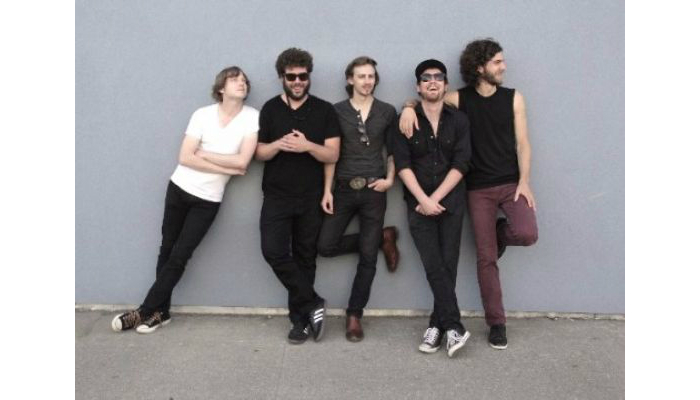 San Francisco blues-rock quintet The Stone Foxes hit the UK on their first UK headline tour with a performance at Manchester’s Fallow Café scheduled for 9 February.

The tour comes in support of The Stone Foxes’ latest album Twelve Spells, due out 18 March.

Despite the band only visiting the UK for the very first time this coming February, The Stone Foxes have already built a very formidable UK following. With over 6 MILLION listens on Spotify, The Stone Foxes have London as the No.1 city in the world with fans in the capital listening to The Stones Foxes in large numbers, hungry to discover more about a band as yet unknown to British media.

The Stone Foxes’ clattery rock songs have previously been featured within episodes of Sons Of Anarchy and Shameless, and sound-tracked ad campaigns by Jack Daniels, BMW and the NFL on FOX.

The looming presence of The Stone Foxes both here and internationally has seen them blaze an impressive live trail where they have supported the likes of The Black Keys, Cage The Elephant and even ZZ Top, plus playing high-profile American festivals including Outside Lands and Voodoo Festival.

From the fuzzy stomp of album opener ‘Eye For Love’, the tarnished-distortion and raucous kicks sees The Stone Foxes combine West Coast slacker riffs with a Deep South blues swagger, like a wide-eyed Jack White jamming with Kings Of Leon.

Elsewhere on Twelve Spells, The Stone Foxes gather indie sentiments in the likes of ‘This Town’ and ‘Locomotion’, which they meld with their distinct rock ‘n’ roll touch as they swagger like a leather clad Arctic Monkeys or a gnarled Catfish and the Bottlemen.

Intimate moments, as found on ‘Cold Like A Killer’ and ‘Jericho’, command attention like a captivating sermon. Yet they can also belt a creeping powerhouse vocals and cutting guitar, reminiscent of Alabama Shakes intertwined with the charm of Father John Misty.

The Stone Foxes perform at Manchester’s Fallow Café on 9 February 2016.

In Review: Elevant at Fallow Cafe
In Review: False Advertising at the Deaf Institute
In Review: Treetop Flyers at Soup Kitchen