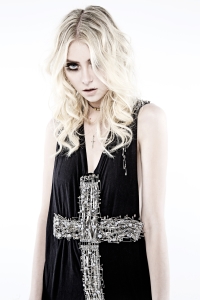 The gig comes after sensational performances at this years Download and Isle of Wight Festivals and in the same year that their top 10 album Going To Hell was released, the follow up to hit debut Light Me Up.

Founded in 2009, The Pretty Reckless, who announced their presence in the music scene (after Taylor Momsen crossed over from acting) with massive hit Make Me Wanne Die, have courted controversy through provocative videos and performances and have never been far from the front pages of the music press.

The New York based rockers, however, are more than just headline makers and – they are a band which can rock it with the best of them.  Over one million sales testify to this, as does the fact that Going To Hell debuted at #5 on the Billboard Top 200 Album Chart and #8 on the Official UK Chart at the same time being praised by critics and fans alike.  Going To Hell is an aggressive, energy fueled offering complete with outstanding riffs and in Taylor Momsen has a vocal power and pugnacity which perfectly reaches to the heart of the subject.

But live, is where The Pretty Reckless really come to life.  They’ve supported the likes of Evanescence, Guns ‘N’ Roses and Marilyn Manson on tour as well as headlining around the world in their own right.  With rock goddess Taylor Momsen oozing stage presence, her raspy vocals able to whip the crowd into a frenzy and an outstanding band behind her performing a catalogue of top-notch rock, it’s no surprise that fans are continually rating them so highly and why their gigs are so frequently knock-out events.

In Review: Fall Out Boy and The Pretty Reckless at the Manchester Arena
In Review: The Orwells at Gorilla
In Review: Marmozets and Lonely The Brave at The Deaf Institute