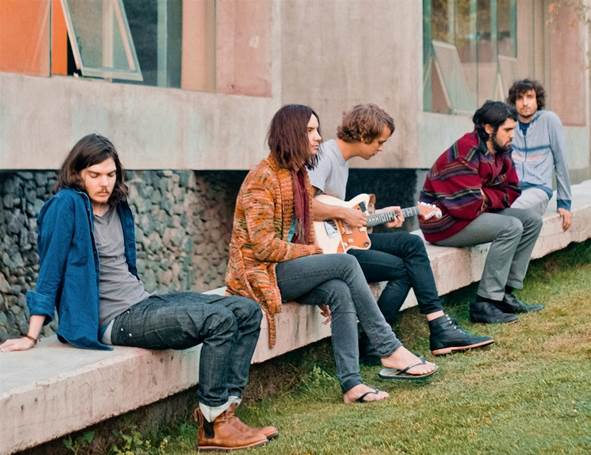 Made up of Kevin Parker (vocals, guitar and kazoo – yes, kazoo!), Jay Watson (synth, guitar and drums), Dominic Simper (bass, guitar and synth), Cam Avery (bass) and Julien Barbagallo (drums)The Australian psych troupe are currently in the midst of a flurry of gigs over the summer, which will also see them at T In The Park, Benicassim and Latitude, having already performed two nights at Finsbury Park as support for Arctic Monkeys’ London shows.

The UK gigs are just the latest in what has been a global effort from teh band which has seen them touring the globe in support of their much lauded sophomore album Lonerism, travelling the world – Brazil, USA and Japan showing the the swell of worldwide support which they are now enjoying.

It was their debut album Innerspeaker, released in 2010, which made the world first notice the Australian psych band and take note of their sound, influenced by late 60s/early 70s psychedelic rock, electronic, hints of pop, and the clever use of effects and experimentation. But despite the experimentation and a melancholy dreamy feel, the music is incredibly melodious. Contemporaries have been taken with the Tame Impala sound too and critics have fawned over the material – Innerspeaker received four ARIA Music Award nominations including Album of the Year and Best Rock Album; whilst Pitchfork dubbed the band ‘Best New Music’. Second album Lonerism, only served to fuel the growing support for Tame Impala, chartin well worldwide. Picking up a Grammy Nomination for Best Alternative Music Album, it was incredibly well received by critics. Both albums scooped Album of the Year Awards from Rolling Stone Australia.

They’ve certainly come a long way from something which started out as a home-recording project for Kevin Parker!

Tame Impala are set to perform at the Albert Hall on 12th July.