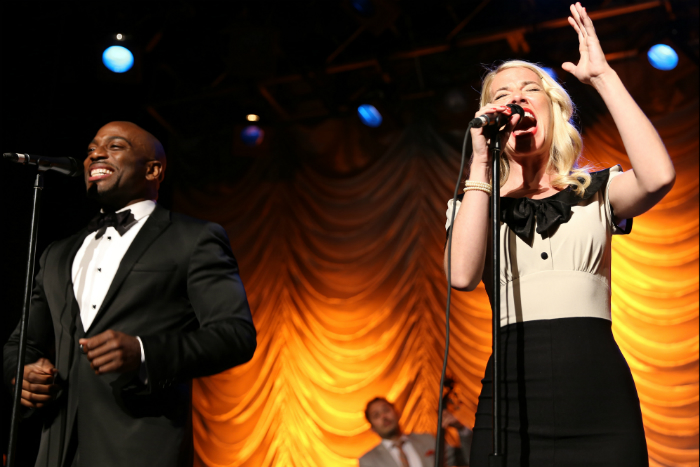 There is a very good possibility that you may have seen or heard of the terrific musical collective known as Postmodern Jukebox on an array of social media platforms. These clever and talented performances have likely shown up on Facebook walls, twitter pages and more, no doubt captioned with glowing praises for their uncanny ability to take a contemporary pop hit and reincarnate it into a superb, vintage-flavoured songbook standard from the last century.

Imagine a Beyoncé, Britney Spears or Taylor Swift song reworked as if they were earmarked for Louis Armstrong, Ella Fitzgerald, Judy Garland, or Nina Simone and accompanied by a rousing mini-big band that sounds like a cheekier Benny Goodman Orchestra on Red Bull.

After their cover of Miley Cyrus’ “We Can’t Stop” racked up over 14.8 Million views on YouTube, Bradlee and his revolving door of seemingly endless talent have become the go-to YouTube channel for music you have to hear.  Last month Postmodern Jukebox reached over 1.7 million subscribers on YouTube and amassed over 390 million views. They have recently been turning Taylor Swift into vintage cabaret with their take on Blank Space, jazzing up Meghan Trainor’s All About the Bass, adding a 70’s soul vibe to Backstreet Boys I Want It that Way plus making a powerful vocal/piano version of Hozier’s Take Me To Church.

Just like with their popular videos, each song in PMJ’s live concert bridges the gap between generations, providing fresh, yet familiar-sounding tunes that appeals to all ages.

Since first arriving on UK shores in early 2014 Postmodern Jukebox have consistently deepened their commitment to the UK by adding more shows, more cities, and bigger venue capacity each time they visit to accommodate for the ever-growing demand. The performers and set lists are never the same but the experience always is – a refreshingly educational, absolutely irresistible, and most important of all, genuinely entertaining show that is not to be missed.

In Review: Return to the Forbidden Planet at the Palace Theatre
In Review: Charlie Cooper at Matt and Phreds
New jazz bar La Gitane opens in Manchester