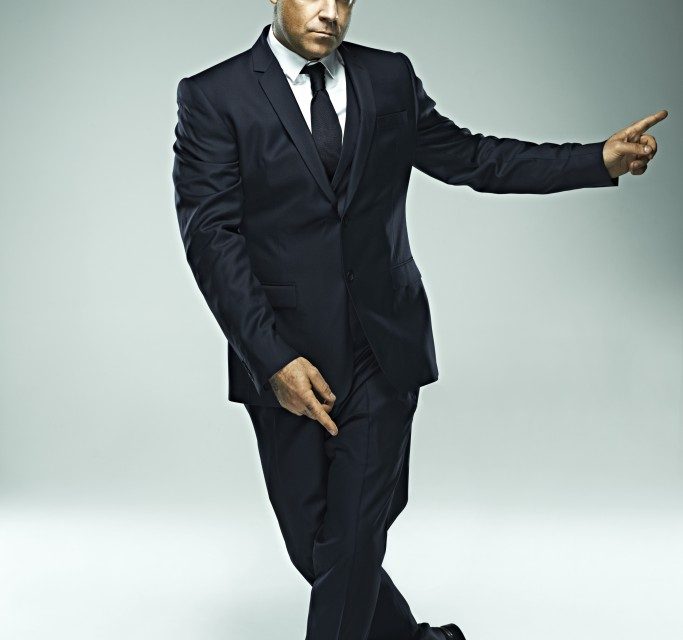 The Swings Both Ways tour launched in Budapest in April and over a period of six months is seeing Robbie take in the UK, Australia and Europe. The tour was announced to such incredible anticipation that a third date at Manchester’s Phones 4u Arena had to be added to satisfy demand.

The swing tour is a follow-up to Robbie’s huge number 1 album “Swings Both Ways” and will feature songs from that album as well as his 2001 album “Swing When You’re Winning” as well as some classic Robbie favourites.

The forty year old Take That member will be joined on stage by his dad, Pete Conway, as big band takes centre stage on this tour. In fact the tour has a west end feel to it, as in addition to the big band, Robbie will be joined by eight dancers and West End choreographer and performer Alistair David (Fosse, The Sound of Music, Tonight’s The Night and Sinatra at the London Palladium) has added his considerable skills to the all singing all dancing extravaganza.

A tour of this type is clearly something which pleases Robbie, who commented “This Swings Both Ways tour is very different from any previous Robbie Williams tour, and I think it’s going to be very special. When I was young the television companies in the UK saw fit to broadcast replay after replay after replay of all the classic old musicals. I think most kids my age were bored and turned off by things like that, but I wasn’t. I was engrossed in it all, lost in the magic of the glamour, and entranced by the craftsmanship of those times. I want this to be a show that gives you the same feeling that I used to have at my grandma’s on a Saturday night, watching the Morecambe & Wise show on TV: a show with variety and lots of showbusiness moments. I know my jazz hands are going to be so tired after this tour. I intend to do my very best to ensure that every one of you is heavily entertained.”

And it will indeed be something different on this tour. Think dancing monkeys, a little pantomime, fake wedding, cabaret, some surprising covers, Mr Bojangles and Minnie The Moocher. So far the show has received hugely positive reviews even if Robbie has had to scale down his energetic performances slightly due to a back injury which kept the football made star from playing in the recent Soccer Aid charity match to his dismay.