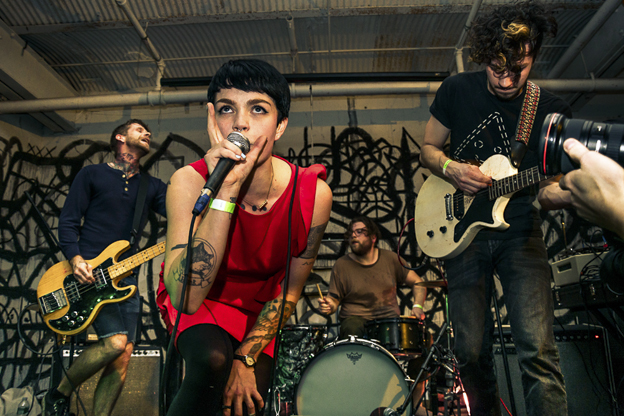 Punk noise band Perfect Pussy are set to perform at the Deaf Institute on Friday 1st August.  The band came together in a less than conventional way in 2012 – they were effectively a ‘fake band’ as singer Meredith Graves was approached by film maker Scott Coffee to appear in his movie Adult World (starring Emma Roberts and John Cusack) as a singer.  She agreed and called upon drummer Garrett Koloski and bass guitarist Greg Ambler to join her as they wrote and performed one track for the film.  But in the aftermath of shooting the movie, they continued to perform together and were joined by guitarist Ray McAndrew and keyboardist Shaun Sutkus as the ‘fake band’ to which Graves has referred continued and started to flourish.

Say Yes To Love has been extremely well received, dubbed as thought-provoking for the honest and extremely personal lyrics; and at the same time fascinating and fiery.  Admired as much for its confidence and directness as the for the subtlety and intrigue.

In Meredith Graves, Syracuse’s Perfect Pussy has a front woman who is charismatic, uncompromising and powerful.  She is at the heart of Perfect Pussy, delivering the vocals with a fire and intensity, together with a snarl.

Perfect Pussy is well known for passionate and raucous live shows (Greg Ambler once decided to throw his instrument of a bridge at the SXSW conference), which have been described by some as ‘unbeatable’.

Support comes from Joanna Gruesome, whos members are all reported to have met whilst attending anger management classes – a quiet, calm night this this will not be!