Previewed: My Vitriol at the Deaf Institute 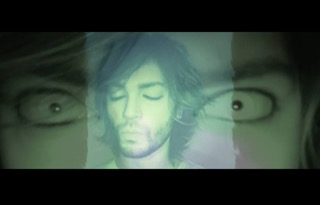 The cult band return to perform tracks from their latest release The Secret Sessions after a lengthy hiatus.

Following their string of Top 40 hits and their critically acclaimed debut album Finelines, My Vitriol rode the crest of a hype wave and media attention, transcending from underground band – with only a matter of months experience – to performances on numerous TV shows such as Top of the Pops and the likes of Glastonbury, Reading/Leeds festivals main stage.  Shortly after their third Top 40 single the band surprised many by calling a sudden hiatus, and proceeded to break the silence over the following years only to perform the occasional sold out show.  It was a quick arrival and departure for the UK quartet which formed in 1998 when Sri Lankan-born singer/songwriter Som Wardner met drummer Ravi Kesavaram at college.  A quick demo EP later (Delusions of Grandeur) the band had already sparked media interest and gone on a break to finish college exams.

The pattern was effectively repeated shortly later – Guitarist Seth Taylor and bassist Carolyn Bannister joined the fold and My Vitriol, the finished product was born. A record deal with Infectious Records was signed in late 1999 and a gruelling tour program followed in 2000, with appearances at all the major events, including the Glastonbury and Reading U.K. festivals.

Finelines My Vitriol’s melodic, guitar-laden debut album was released in March 2001 to critical acclaim, with even the influential NME hailing it as “already one of the albums of 2001”. And then they quickly went in to hiatus again.

Over the years, the band have received high praise from peers and press alike; with Chino Moreno (Deftones), Coldplay, Butch Vig & Shirley Manson (Garbage) and many others praising the band in the music press. 2016 saw the band’s live return to support Muse at the London O2 Arena and shows and festivals across Europe to over 100,000 people. At the very end of 2016, the band announced a fanbase special at the London Scala on the 12th April 2017, which sold out immediately.

My Virtiol perform at the Deaf Institute on 8 April 2017.