Previewed: Mounties at The Deaf Institute 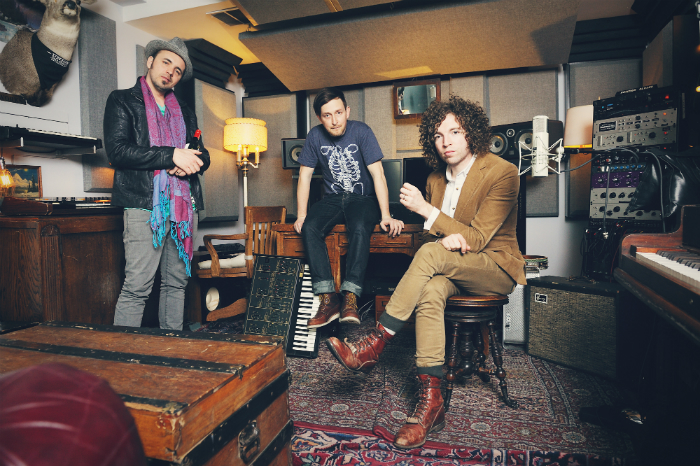 Mounties, the composite musical home of Hawksley Workman, Ryan Dahle, and Steve Bays who first met in 2009 at the Juno Awards, have evolved from a group hug into a spectacular improvised two-week recording session three years later. Perhaps most notably known for their collective work in Hot Hot Heat and Fur Trade, as well as Limblifter and Age of Electric, and their celebrated solo identities, Mounties were actually the vision of Workman, who arranged a trip out to Vancouver where they quickly started recording in Bays’ studio.  Before they know it they had 52 songs (that took just one week!).

They quickly made a splash with their infectiously catchy first single, Headphones, and have since gone down a storm after series of successful US dates have now arrived in the UK for a brief run of dates, which will find them at Manchester’s Deaf Institute on Friday 17th April.

‘Headphones’ reached #9 at Alternative radio in Canada and #12 at Modern Rock (BDS). Mounties have been a fixture at Canadian Alternative radio ever since, with each of their next 2 singles making it into the Top 20. The band completed an impressive run through the summer festival circuit in 2014, including stops at Squamish Valley Music Festival and Riot Fest in Toronto and their rousing live show has earned high praise from fans and critics, with the Canadian national monthly music publication, Exclaim declaring “Mounties’ set was a bundle of boundless energy from a bunch of guys who are clearly in it for the fun. Their ’80s-laced pop numbers sent the sizable afternoon crowd into fits, with one fan in particular kind of losing her mind up front in the midst of some of Canada’s most talented and earnest musicians.”

The band released their debut album, Thrash Rock Legacy, earlier in the year in the UK.  The album, which was recorded partly in Vancouver and partly in the middle-of-no-where in Ontaria was nominated for the Polaris Music Prize in Canada upon its earlier Canadian release .  But despite the title, the trio are far from thrash rock.  The album, which does it’s best to deny an affiliation to one particular genre ranges from power-pop to sing-a-long to alt-rock and shoegaze.

Mounties perform at The Deaf Institute on 17th April.

In Review: Teleman at The Deaf Institute
In Review: Joan As Police Woman
In Interview: The Orielles