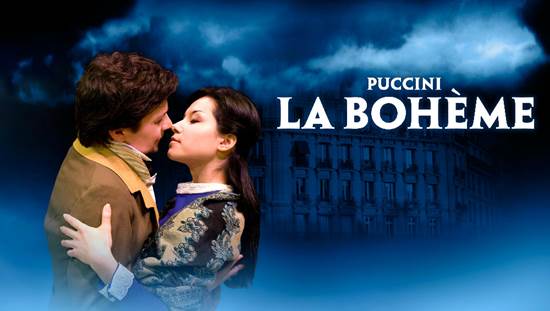 La Boheme will be traditionally staged featuring beautiful sets and costumes, reflecting the Bohemian art of the period, and will include a brass band, snow effects and Musetta’s dog will also make an entrance.

Puccini’s masterpiece, which is based on Henri Murger’s novel Scenes de la vie de Boheme, is set in Paris and is  the  tragic  tale  of  hopeless  romance  between  the  doomed, consumptive Mimi and penniless writer Rodolfo. After falling in love instantly, Rodolfo later leaves Mimi due to her flirtatious behaviour, and although briefly reunited after Rodolfo is wrecked by guilt, the tale comes to a tragic conclusion.  The classic tale of Parisian love and loss features many famous arias including Your  Tiny  Hand  is Frozen, They Call Me Mimi and Musetta’s Waltz.

Producer Ellen Kent commented about the emotional work, “The scene when Mimi and Rodolfo meet and she sings They Call Me Mimi always makes me cry. It’s a lovely piece of music.  I try to do opera that the audience can emotionally connect with, not just on a musical level but with the personal drama happening on the stage.”

Ellen was inspired by reading George Orwell’s book Down and out in Paris, in her depiction of the extreme poverty in the backstreets and attics of Paris.

The French soprano Olga Perrier together with the international soprano Ecaterina Danu are returning to star in this production as Muzetta and Mimi respectively. The international tenors Giorgio Meladze and Vitalii Liskovetskiy are also returning after their previous huge success in the UK. The Spanish Tenor Giorgio Meladze, has acquired critical acclaim in Europe, singing in Milan, Spain and across Europe, also singing in Austria together with Jose Carreras in 2014.  Giorgio will be singing the part of Rodolfo. Sung in Italian with English surtitles.

Ellen Kent Opera returns again in May 2017 with La Boheme, Nabucco and Aida.