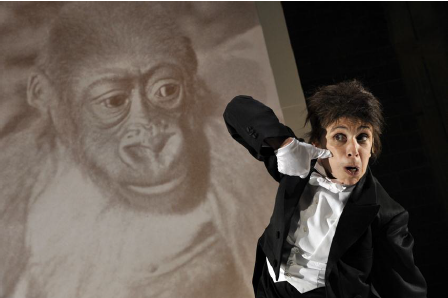 Olivier Award winner Kathryn Hunter (The Visit) is set to reprise her role playing a monkey, playing a man, in the highly acclaimed one-woman show, Kafka’s Monkey.  The show will run from Wednesday 17 until Saturday 27 June at Home.

Based on A Report to an Academy, Kafka’s Monkey s a powerful exploration of the struggle to belong whilst remaining forever on the outside and tells the tale of the ape-man, brutally imprisoned and desperate to escape.  The ape-man tells of his rise through the ranks of the beasts to become a master of the ‘civilised world’, walking, talking, spitting, smoking and hard drinking, a man of the stage.

It’s typical Kafka – a grotesque, brilliant mixture of absurdity and pain, which has received remarkable reviews during its various performances around the world.

“I am delighted to be able to give audiences in the north of England the chance to see Kafka’s Monkey” says Walter Meierjohann.  “The response worldwide to Kathryn’s astonishing performance was truly gratifying, and it is productions such as this which define Home’s artistic approach and ambitions.”

Kafka’s Monkey is performed at Home from Wednesday 17 June until Saturday 27 June with tickets priced from £15 – £29.50.

Previewed: Gods Are Fallen And All Safety Gone
In Review: Hidden at the King’s Arms Theatre
In Interview: Amy-Jane Ollies, Artistic Director of the 1956 Theatre