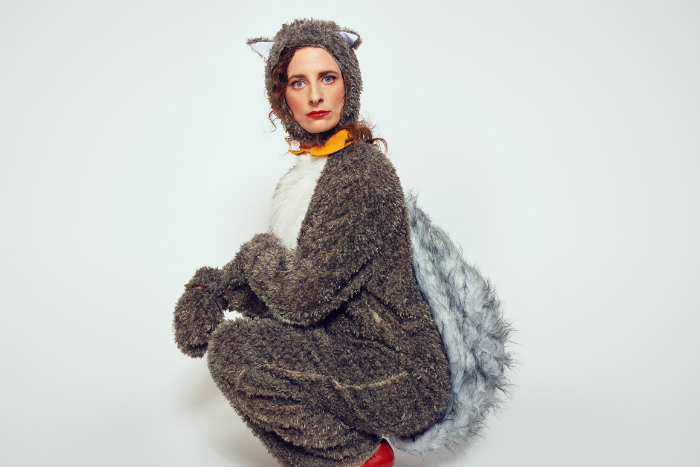 One of the Fringe’s favourite comedians, Felicity Ward, is hyped up, jumped up and ready to Bust a Nut on her second nationwide tour this autumn.  The run of 27 dates follows amazing reviews and an Edinburgh Comedy Award nomination at this year’s festival!

In fact, she’s been busting a nut since her last tour.  She got married, starred in her own Netflix special as part of the series Live From The BBC, lived with her in-laws, explored whether technology can save her from herself in her own Radio 4 series Appisodes, taken up yoga, and she regularly co-hosts the popular The Guilty Feminist Podcast.

Not only has she been raking in the critical acclaim from her various Fringe shows of late, but she recently set out to break down the stigmas around mental health and IBS in her show What If There Is No Toilet?, which she then turned into a highly successful Australian documentary Felicity’s Mental Mission (ABC1/ABC2) in 2016. She has headlined Live from the BBC on BBC2 and BBC3, starred in Josh (BBC3), appeared on Mock the Week (BBC 2), Make You Laugh Out Loud (Channel 5), Sam Delaney’s News Thing (RTUK), featured on Museum of Curiosity and David Baddiels’ Don’t Make Me Laugh (Radio 4), Ronny Chieng’s sitcom Ronny Chieng: International Student (ABC) and in Sydney’s Just For Laughs Gala (The Comedy Channel, Australia). She’s opened for Katherine Ryan, Maria Bamford and Amy Schumer, all within this year, made Blaps for Channel 4, co-hosts her own podcast The Unbelievable Ashes Podcast with Andy Zaltzman, toured nationwide, was invited to the curated Sydney Festival 2017 and is  soon set to appear on the upcoming series Live from the Comedy Store (Comedy Central). And, if that’s not enough, she has been commissioned to pen her own sitcom pilot in Australia.

When does Felicity Ward present Busting A Nut at Salford’s Lowry?