Previewed: Billy Elliot The Musical at the Palace Theatre 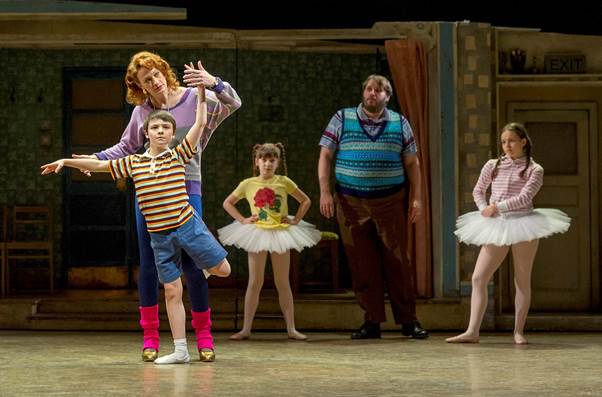 Set in a northern mining town, against the background of the 1984/85 miners’ strike, Billy’s journey takes him out of the boxing ring and into a ballet class where he discovers a passion for dance that inspires his family and whole community and changes his life forever.

Acclaimed by audiences and critics alike, Billy Elliot the Musical has now been seen by nearly 11 million people across five continents and is the recipient of over 80 awards internationally, including ten Tony Awards and five Olivier Awards.

In total, worldwide, ninety boys have now played the iconic role of Billy Elliot on stage. In May last year, Billy Elliot the Musical celebrated its 10th birthday at the West End’s Victoria Palace Theatre.

They all join Annette McLaughlin as Mrs Wilkinson, Martin Walsh as Dad, Scott Garnham as Tony and Andrea Miller as Grandma.

Annette McLaughlin’s many West End musical theatre credits include Mrs Wormwood in Matilda, Velma Kelly in Chicago and Erma in Anything Goes. Martin Walsh is currently filming Rovers for Sky 1. His other TV credits include Game of Thrones, Downton Abbey and Coronation Street. Scott Garnham’s many West End credits include Les Misérables and the original casts of I Can’t Sing and Made In Dagenham. Andrea Miller has appeared in numerous musicals including Sweeney Todd, Into the Woods, Blood Brothers and Annie. She most recently appeared in Sister Act.

Billy Elliot the Musical is brought to life by the multiple award-winning creative team behind the film including writer Lee Hall (book and lyrics), director Stephen Daldry, and choreographer, Peter Darling, joined by Elton John who composed the show’s score. The production features scenic design by Ian MacNeil, the associate director is Julian Webber, costume design is by Nicky Gillibrand, lighting design by Rick Fisher and sound design by Paul Arditti. Musical supervision and orchestrations are by Martin Koch.

Billy Elliot the Musical is presented by Universal Stage Productions, Working Title Films and Old Vic Productions and is based on the Universal Pictures/Studio Canal film. The show is produced by Tim Bevan, Eric Fellner, Jon Finn and Sally Greene. Angela Morrison and David Furnish are executive producers.

Billy Elliot The Musical runs at Manchester’s Palace Theatre from 29 November 2016 until 28 January 2017.