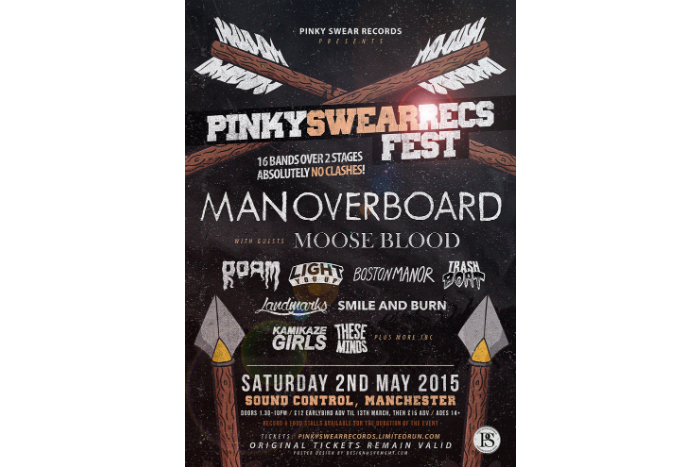 Northern label Pinky Swear Records, the DIY outfit known for its work with Neck Deep, ROAM, Your Demise, and Nai Harvest amongst others) have announced their first ever festival, which will take place at Manchester’s Sound Control on Saturday 2nd May.

Already announced for the sixteen band one day festival are US pop punk outfit Man Overboard, who will headline, along with Moose Blood, ROAM, Boston Manor, Trash Boat and Kamikaze Girls.  The festival will feature two stages, but is being scheduled to ensure that there will be no time clashes.

Speaking of the event, Pink Swear Records co-founder Lee Burgess commented “I want it to be a good mix of everything I’d want if I was to attend an indoor all day festival myself. That’s all we’ve ever done when it’s come down to our releases anyway; so we’ve hit it with the same ethics. We’ve picked bands we like and bands we want to put in front of people. We’ve kept the cost down to just £12 per ticket, with no booking fee nonsense, for a total of 16 bands. No clashes so bands don’t have to compete and punters get to see everyone they want to; plus no barriers cause they’re just annoying at punk shows. We’re inviting some labels and distros down to sell records, and we’re gonna have freshly cooked meat and vegan food options available at prices that are ridiculous. We just want it to have a fun vibe all round.”

The final six bands to perform will be named in March.

Early bird tickets are currently on sale priced at £12 for the whole day, increasing to £15 on 13th March.

In Review: Marmozets and Lonely The Brave at The Deaf Institute
In Review: The Orwells at Gorilla
In Interview: The Orielles