New film commissioned by HOME to be released about Tohoku earthquake 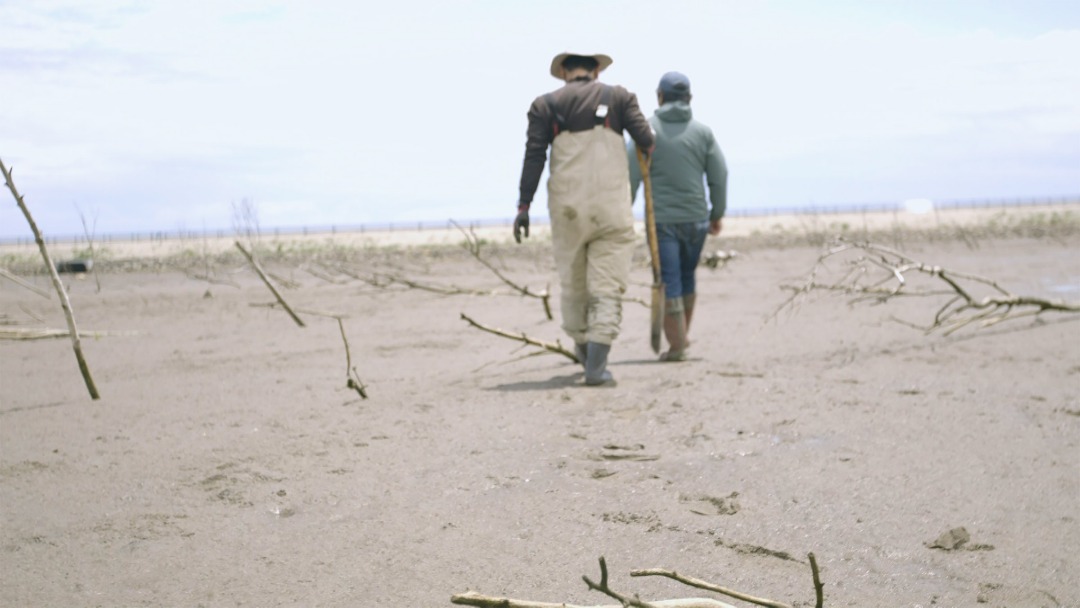 A new artist film commissioned by HOME Manchester is set to be released to mark the 10th anniversary of the Great East Japan disaster.

The production by visual artist Clara Casian addresses one of the most powerful earthquake and tsunami ever recorded.

The Earth Asleep features music by composer Robin Richards and will be released on 11 March on BFI Player.  The travelogue looks at how our exposure to extreme live-trauma in the form of rolling news and citizen reportage has resulted in an inability to process grief at a manageable, human scale.

The Tōhoku earthquake and tsunami in 2011 killed over 15,000 people and caused a nuclear accident at the Fukushima Daiichi Nuclear Power Plant – the worst such incident since the Chernobyl disaster in 1986.

In the film, Casian and Richards travelled to the village of Otsuchi in remote North-East Japan to document and observe the experiences of local residents, from an elderly man who lost his home but whose identity with place is deeply rooted, to the grandmother who raced to the local primary school as the waves surged towards shore, or the pilgrims who journey to a remote phone booth to speak to the silent spirits of those who have passed on.

The film will be available on BFI Player and also screened at HOME with a live musical accompaniment later in the year.

Director Clara Casian said, “To go far with the tripod and the camera, with the plans of meticulous interviews, with the burning heart lit by the desire to discover distant realms, people and forgotten histories, it may seem a fearful or unusual thing. Mystical signs, symbols and incomprehensible rituals strike the memory of those who are no longer. The years pass and the events enter into a shadow account, and only those who have suffered bear the memory of their dear ones.

“From their tears, to the light of the ritual fire, to the strange murmur of temple prayers, from the strange picture of the telephone booth in Itaru’s garden, from the blinking of footsteps in the mud and the contorted forms of the water-swept vegetation, we recalled a time unprecedented, so that we never forget that the earth has delicate systems that must be taken care of, in order to prevent fatal climate change.”

The soundtrack will be released later this year with one track, Haga now available.  The track was inspired by a meeting with Otsuchi resident Masahiko Haga who works with young people and orphans in the time.  Composer Robin Richards says of meeting Masahiko Haga, “We interviewed several people in the town who told us about their different spiritual methods of dealing with grief and loss following the disaster, and their stories form the narrative threads of the film. Masahiko Haga explained to us that the spirits return to heaven when the fire goes out.

“The evening spent with Haga was an extremely powerful and moving experience, and Clara and I knew instantly that it would be an integral part of the film and score. The xylophone melody heard in Haga is taken from the Otsuchi neighbourhood music – a melody played over the loudspeakers used for earthquake and tsunami warning, heard every few hours across the whole town.”

The Earth Asleep will be available as part of Rentals, BFI Player’s VOD service.