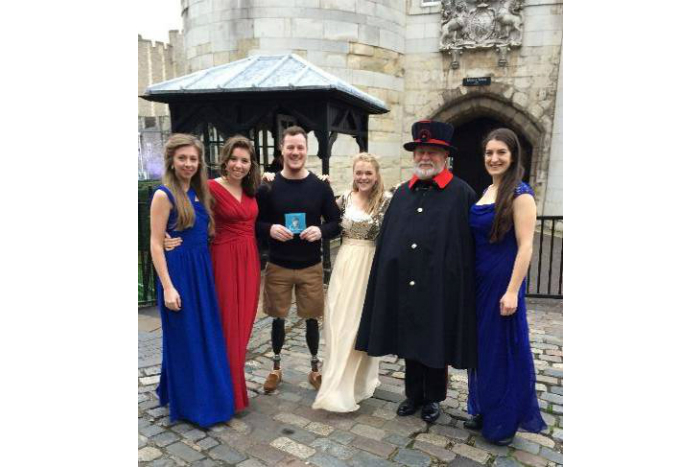 A new song dedicated to the Queen was released with a live performance at the Tower of London featuring Manchester soprano Lucy Prendergast, who began her musical career with the Halle Youth Choir and recent Royal Northern College of Music graduate Eleanor Sanderson-Nash.

Lucy Prendergast initially trained under the direction of James Burton before progressing to the National Youth Choir and later reading for a degree in Arabic before graduating from Trinity College, Cambridge where she held a choral scholarship under Stephen Layton.  Lucy has featured in recordings and solo performances across the UK, Europe, USA and Canada with notable highlights including an acclaimed live recording of The Dream of Gerontius with Sir Mark Elder, appearances at the London Proms directed by Daniel Barenboim, as well as multiple award winning recordings and performances with Trinity College Choir.

Eleanor Sanderson-Nash is currently completing her postgraduate training at the Royal College of Music where she is an RCM Award Holder after graduating with a First Class Honours Degree from Manchester’s RNCM.  She has quickly established herself through opera and musical theatre roles including Cobweb in a Misdummer Night’s Dream, April in Sondheim’s Company will also be performing the roles of Ida in Strauss’ Die Fledermaus at the RCM International Opera School and Despina from Cosi fan tutte in RCM Opera Excerpts in January.

The track entitled simply Her Majesty The Queen (A Tribute) was performed on the banks of the River Thames by the Four Sopranos, singers Eleanor Sanderson-Nash, Helena Raeburn, Chloe Morgan and Lucy Prendergast.  They have all graduated from the top colleges and academies of the UK and perform both as soloists and as part of the group The Four Sopranos

The Four Sopranos were joined by former soldier Michael Swain MBE, who is an ambassador for Haig Housing Trust, the charity which is benefitting from sales of the single.  Fifty percent of revenues from the sale will be donated to Haig Housing Trust’s Coming Home fundraising campaign, a charity of which HM The Queen is the Patron and which provides specially adapted housing for severely wounded and traumatically disabled Service men and women. Michael Swain lost both his legs when he stood on an IED in Afghanistan.

The track, written by Adrian Munsey and Jeff Chegwin, features the voice of the Queen from her 1957 Christmas speech which was the first to be broadcast on television and will compete for the coveted Christmas number one slot.

Adrian Munsey said “This is a simple musical tribute to HM The Queen, emphasising the affection the nation has for the Queen and her importance in providing dignity and continuity to the nation through the many changes experienced during her long reign.”

Concept creator Jeff Chegwin said “My strategy behind this record was to create with composer Adrian a genuine thank you piece for a very unique special woman who we all hold dear in our hearts and for it to represent and resonate lyrically the voice of the man and woman on the street from the taxi driver, teacher, greengrocer to the doctor, soldier, labourer and the nurse and school run mum, teacher and grandmother all of whom the Queen has inspired through decades of selfless devotion.”