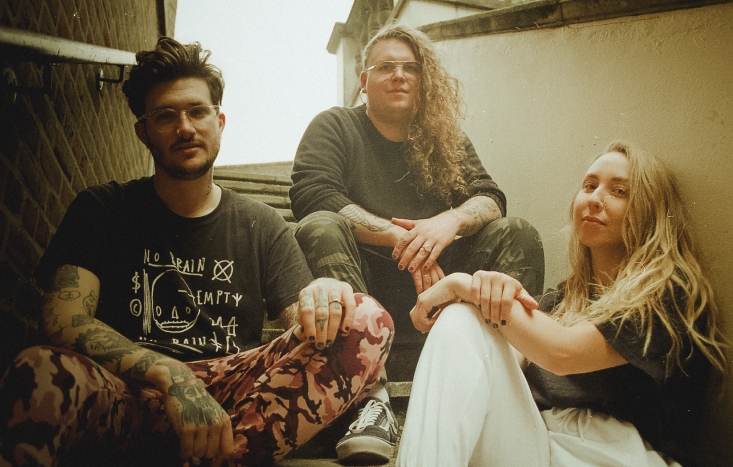 Milk Teeth will release their self-titled second album on 27 March 2020 ahead of a run of UK dates culminating in a Manchester gig at Manchester Academy 3.

The trio will perform nine shows around the UK in support of the new album in April.

Milk Teeth marks the band’s second album and first since signing to Music For Nations in 2019.  The album was recorded at The Ranch in Southampton with Neil Kennedy.  Speaking about the album Milk Teeth’s Becky Blomfield explained that despite the band’s outspokenness, including their on-stage views on Borish John at last year’s Reading Festival, their advocating of LGBTQ+ rights and issues with mental health services, the album is not specifically political.  “It’s not political in the traditional sense,” she says.  “There were definitely politics involved in my surroundings when the album was being made.  It also touches on the implications of feminism and women’s rights in my life. I guess you could say it’s more about the politics of self.”

The album is one which almost wasn’t.  In 2018 with a full length debut and three Eps to Milk Teeth’s name, the singer/bassist felt disillusioned.  She had lost confidence in her role and was unsure what to do.  “I’d got to a place where I didn’t think my opinion was valid,” says Becky. “But then I decided I needed to write about the things that had been so difficult during that period, personally and professionally, in order to take the band forward and make our definitive musical statement. Making this record self-titled is definitely a statement. It’s a statement of intent in terms of who we are now and what we’re capable of.”

Subsequent changes in the band’s line up coincided with a new confident chapter in Milk Teeth’s story.  Em Foster became a full-time member in September 2018 and Gold Key drummer Jack Kenny then joined.

“We didn’t want to do anything we couldn’t recreate live,” explains Becky of the process of working with regular producer Neil Kennedy, who oversaw the band’s 10 days at The Ranch studio in Southampton. “It was minimal, as opposed to the big-budget sounding production Milk Teeth had before. It wasn’t to disrespect anything we’d done with [Neil] before, but I felt our last couple of releases had gone done a more commercialised route. I wouldn’t say we’ve done a 360, we’ve just gone back to drawing from our early days and the sound we started with, those original influences like Nirvana, Pixies, Manic Street Preachers, Smashing Pumpkins and Skunk Anansie.”

When do Milk Teeth headline at Manchester Academy 3?