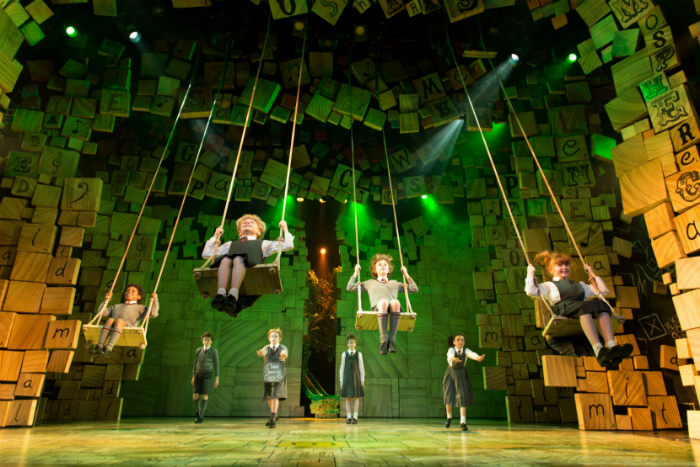 The Royal Shakespeare Society has announced that its multi award-winning production of Matilda The Musical will have a 10-week run at Manchester’s Palace Theatre during its UK and Ireland tour.

Matilda The Musical was inspired by the incredibly popular Roald Dahl book and was commissioned by the Royal Shakespeare Company.  It premiered at the RSC’s Courtyard Theatre in 2010.

Dennis Kelly, writer of the book, commented about the touring production of Matilda The Musical, “It’s been a long time coming but I’m delighted that we get to take Matilda around the UK and to Ireland. We have some fantastic theatres in this country and in Ireland, supported by smart, engaged audiences and we can’t wait to bring this crazy, messy, anarchic explosion of a show to them.”

Matilda The Musical is written by Dennis Kelly, with music and lyrics by Tim Minchin, and direction by Matthew Warchus. The production is designed by Rob Howell, with choreography by Peter Darling.  Orchestrations, additional music and musical supervision is by Christopher Nightingale.  Lighting is by Hugh Vanstone, sound by Simon Baker and the special effects and illusions are by Paul Kieve.

The Royal Shakespeare Company’s production of Matilda will be accompanied by a new education programme to engage young people.   The RSC aims to reach more than 15,000 children.  Events are set to include travelling library of stories led by Mrs. Phelps, to whole school takeovers of Matilda.

How successful has Matilda The Musical been?

Matilda The Musical is now in its sixth year in London’s West End, becoming the longest running production at the Cambridge Theatre.  It continues to play to packed houses and is currently booking until December 2017.

Matilda The Musical has now played in 50 cities worldwide, delighting audiences in London, Australia and on tour around North America.  The musical has been seen by more than 6.5 million people worldwide.

The production swept the board at the 2012 Olivier Awards, with a record-breaking seven awards.  It also won four Tony Awards and a Tony Honor for Excellence in the Theater for the four girls sharing the title role on Broadway.  In addition, Matilda The Musical has won 85 international awards, including 16 for Best Musical.

When does Matilda The Musical come to Manchester’s Palace Theatre?

Tickets for Matilda The Musical at the Palace Theatre Manchester go on general sale on Wednesday 26 April.