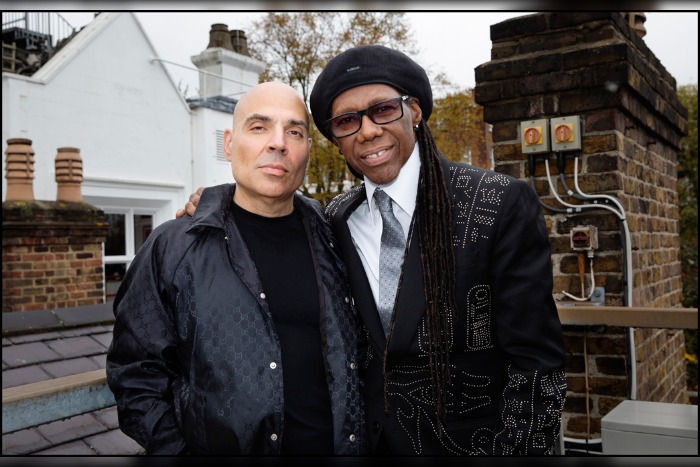 The award came after the duo delivered an online masterclass to students of popular music at the world-leading conservatoire.

Recognised as one of the most talented and influential musicians, songwriters and producers in the world, guitarist Nile Rodgers’ back catalogue contains some of the greatest sounds of all time.

As the co-founder of CHIC, Nile pioneered a musical language that generated chart-topping hits like Le Freak and sparked the advent of hip-hop with Good Times. He transcends all styles of music across every generation with a body of work that’s garnered him inductions into the Rock & Roll Hall of Fame and the Songwriters Hall of Fame.  Most recently, Nile was appointed the first Chief Creative Advisor for the legendary Abbey Road Studios and he is the newly-elected Chair of the Songwriters Hall of Fame.

His work in the CHIC Organization and his productions for artists such as David Bowie, Diana Ross, and Madonna have sold over 500 million albums and 75 million singles worldwide while his innovative, trendsetting collaborations with Daft Punk, Avicii, Sigala, Disclosure, and Sam Smith reflect the vanguard of contemporary music.

A renowned music industry executive and entrepreneur, Merck Mercuriadis’ knowledge of the music business – from artist management to music publishing – is unrivalled. He has managed an incredible list of global artists over the past 30 years, including Elton John, Guns N’ Roses, Morrissey, Beyoncé and Iron Maiden, and is the Founder and CEO of the Hipgnosis Songs Fund Ltd, a £1 billion market cap FTSE 250 Song Management company which currently houses over 6000 songs, including Single Ladies (Put a Ring On It), Sweet Dreams (Are Made of This), We Are Family, Le Freak and Don’t Stop Believin’.

Professor Linda Merrick, Principal of the RNCM, added, “It is a pleasure to confer Honorary Professorships of the RNCM on Nile Rodgers and Merck Mercuriadis in recognition of their extraordinary achievements in the music industry and I was delighted that they shared their expertise and experience with our students during a masterclass. The past few months have been especially challenging for the higher education and cultural sectors. I know that as this exciting new relationship develops, Nile and Merck will play a significant role in inspiring our young musicians as we work collectively to define the future of music.”