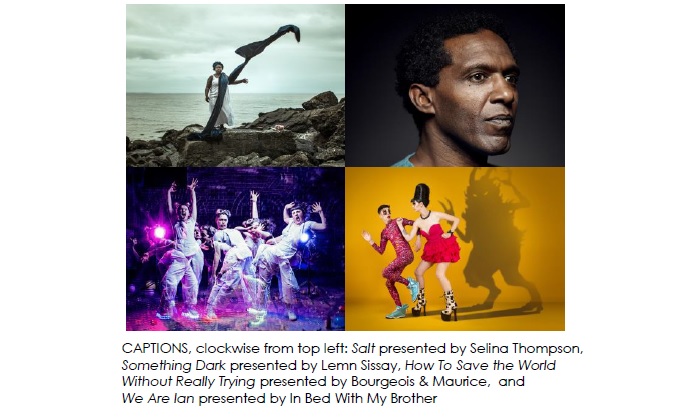 Orbit Festival returns to Home Manchester with 13 productions taking place across 16 days in September and October.

The festival will feature new Home commissions from theatre companies such as Javaad Alipoor (The Believers Are But Brothers) and Daniel Bye (Instructions for Border Crossing).  Orbit will also host the premiere of Fellswoop Theatre’s latest production, Palmyra, inspired by the destruction of the ancient Syrian city.

But it’s not just the theatre at Home which will host the productions.  Orbit Festival will also hold shown in unique locations – amongst them a caravan, a car park and the roof of Home.

Orbit Festival has also teamed up with Journeys Festival International, which celebrates the creative talent of refugee and asylum seeker artists.  They will stage a number of extra events alongside Orbit 2017 including a virtual reality installation alongside the production of Palmyra.

Bravado presented by Scottee
Thursday 28 – Saturday 30 September 2017 (post-show discussion Friday 29 September). Bravado will be staged at an outside venue to be announced nearer the time of the festival.
The festival opens with this no holds-barred exploration into what masculinity meant in the final decade of the 20th century. Scottee grew up in a macho world of strong, brave and violent men and boys. Bravado, his memoir of London working-class masculinity as seen by a sheep in wolf’s clothing, was described by The Stage as “an astonishing show. It’s an open wound that bleeds painful truths.”

Eurohouse presented by FellSwoop Theatre
Monday 2 – Tuesday 3 October
This satire by two performers – one Greek, one French – who dance and shout, cry and sing, agree and disagree, about life in the European Union, is a darkly comic look at the EU’s founding ideals looks at what got lost along the way. The production was nominated for a Total Theatre Award (Innovation, Experimentation & Playing with Form) at the Edinburgh Festival Fringe 2016.

Palmyra presented by FellSwoop Theatre
Tuesday 3 – Wednesday 4 October (post-show discussion Wednesday 4 October)
This world premiere production is inspired by the destruction of temples and artefacts in Palmyra, Syria. Using images of destruction as a starting point for an exploration of the situation in the Middle East and the roots of Jihad in Europe, Palmyra will invite the audience to step back from the news and instead reflect and take a wider view on what goes on in the region.

Rekrei presented by Journeys Festival International
Monday 2 – Wednesday 4 October
Rekrei, an installation in the Home foyer and directly related to Palmyra, is a crowdsourced project to collect photographs of monuments, museums, and artefacts damaged by natural disasters or human intervention, and to use that data to create 3D Virtual Reality representations, allowing viewers to explore recreated three-dimensional representations of heritage long gone.

Salt presented by Selina Thompson
Friday 6 – Saturday 7 October
In February, two artists got on a cargo ship and retraced one of the routes of the Transatlantic Slave Triangle – from the UK to Ghana to Jamaica, and back. Their memories, their questions, and their grief, took them along the bottom of the Atlantic and through the figurative realm of an imaginary past. It was a long journey backwards, in order to go forwards. Salt, from Leeds-based artist and performer Selina Thompson, is what they brought back.

The Believers Are But Brothers presented by Javaad Alipoor
Monday 9 – Thursday 12 October
We live in a time where old orders are collapsing: from the post-colonial nation states of the Middle East, to the EU and the American election. Through it all, tech savvy and extremist groups rip through 20th century political certainties. Amidst this, a generation of young men find themselves burning with resentment; this crisis of masculinity leads them into an online world of fantasy, violence and reality. Manchester-based writer and theatre-maker Javaad Alipoor spent time in this digital realm, exploring the blurry and complex world of extremists, spies, journalists and fantasists. This bold one-man show weaves together their stories, inviting the audience into that web. Through this lens in a show co-commissioned by Home Manchester, Transform Festival, and Ovalhouse in London, Javaad explores the complexities of being a young male Muslim today.

Mobile presented by Paper Birds
Tuesday 10 -Saturday 14 October
Mobile will take place in a caravan placed in the public realm outside Home Manchester. An ordinary looking caravan. An extraordinary experience. A treasure trove of magical theatre and digital wizardry. Long-established Festival regulars (Latitude, Brighton), Paper Birds’ Mobile, an intimate 40-minute show based on interviews conducted in communities across the UK, is made for audiences of up to eight people at a time, and promises to be a very different theatrical experience.

Bourgeois & Maurice: How To Save The World Without Really Trying
Tuesday 10 – Wednesday 11 October
Outrageous sequin-clad glamour duo Bourgeois & Maurice dig their shellac nails deep into our post-modern, post-gender, post-Brexit world in How To Save The World Without Really Trying, a five-star hit at last year’s Edinburgh Festival. Riotous original songs meet hyper surreal, high fashion, in this provocative, thought-provoking and hysterical catwalk through the quagmire of current affairs from a company who took part in Yule Be Sorry, a big success at Home Manchester at Christmas 2016.

We Are Ian presented by In Bed With My Brother
Thursday 12 – Saturday 14 October (DJ Darryl Marsden spins the Hacienda classics of the day, Friday 13 October)
Travel back in time to the wild days of Madchester… 1989. Manchester. The year that everything changed from black and white into crazy Technicolor. A frenzy of drugs, beats and bucket hats. Illegal raves. Acid parties. Just jumping up and down in a field and throwing two fingers to Thatcher… Remember it? Because the company doesn’t. They weren’t even born. But Ian was. And Ian does remember. Ian was their age in the late ’80s and early ’90s Acid House scene in Manchester. The show is made from recordings of conversations they’ve had with Ian, and scored by his favourite tracks from the era. In Bed With My Brother was nominated for a Total Theatre Best Emerging Theatre Award at last year’s Edinburgh Festival.

Lemn Sissay: Something Dark presented by Home Manchester and Journeys Festival International
Friday 13 October
Something Dark is the story of Manchester performance poet and writer Lemn Sissay’s upbringing in children’s homes and foster care in and around the city, and the search for his family and true identity. Originally directed by John McGrath (National Theatre of Wales, Manchester International Festival), Something Dark was adapted for BBC Radio 3 in 2005. Lemn’s most recent work, The Report, staged at the Royal Court Theatre in London, was a searing account of the psychologist’s report about the abuse he suffered as a child in the care system.

How To Win Against History presented by Áine Flanagan Productions
Saturday 14 – Sunday 15 October
This hilarious, ripped-up extravaganza was a big hit at the 2016 Edinburgh Festival. Written, composed, and performed by Seiriol Davies and directed by Alex Swift (both from Caroline Horton’s Mess), it tells the outrageous story of the 5th Marquis of Anglesey whose transvestism burned brightly for an all-too brief period at the end of the 19th century. The marquis blew his family’s colossal fortune on diamond frocks, lilac-dyed poodles and putting on simply amazing plays to which nobody showed up. After he died at 29, his family burned every record of him, and carried on as though he never was. How To Win Against History was described in a five-star review by The Stage as “a total pleasure.”