Kerri Watt brings back the 80s for new music video 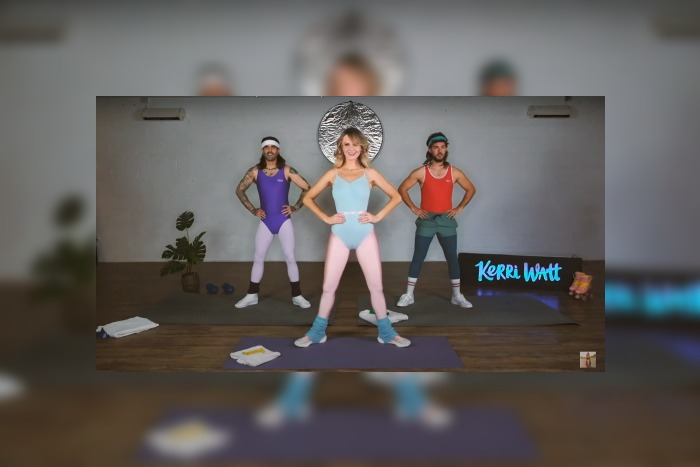 Kerri Watt has invoked the spirit of the 80’s for the music video to latest track You Can’t Catch Me.  The track marks the final single to be released from her EP, Chapter One.

As with her recent DIY videos Kerri has self-produced and edited the video, working alongside director Dr Shootz and creative director Milly Upton, the former who worked on Jessie, and latter whom worked on Kissing Fools.

For her latest video, Kerri Watt has adopted a classic 80’s style aerobics workout to the soundtrack of one of her most infectious tunes to date, although this wasn’t the original idea as she explains, “My original idea for a video was to film it in California – the place that inspires a lot of my songwriting! I wanted to cut between clips of me skate boarding down the street, roller blading along the promenade and driving a convertible up the coast. But, due to Covid, I had to get creative!”

In the video, Kerri puts her partners to work in some outrageous outfits.  “I put my man and his friend in a pair of tights, took my camera down to a local dance studio and channeled my inner Judi Sheppard Misset. Filming and editing the video was the most fun I’ve had all year, and also probably the biggest work out I’ve had all year! It’s in keeping with the 80’s theme of some of my other recent videos – Cut Me Loose and Kissing Fools.”

The track is featured on her EP Chapter One, one of a string of EPs which replaced her planned debut album when the Covid-19 pandemic unfolded.  “I’ve waited such a long time to release my debut album,” she says, “so when we went into lockdown a few months before it was due was pretty gutting. Releasing an album with no live shows to promote it, and without getting to interact with the incredible fans that have been on this long journey with me didn’t feel right.”  But, she continues, “in trying to come up with an alternative that held the album off but still allowed me to connect with my fans and keep me feeling inspired, I had the idea to keep putting out little nuggets from the album in the form of EP’s – giving more glimpses into the style of the album. I’m hopeful that by the time the full record comes in Spring 2021, I’ll be able to hit the road and sing and dance along with all the wonderful people that have stuck with me over the years.”