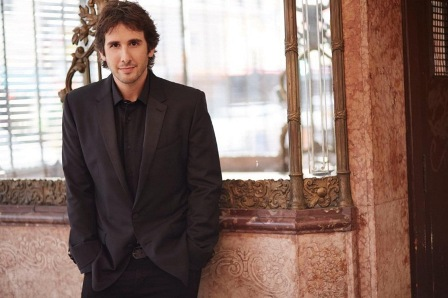 Multi-platinum and multi-million selling Josh Grban has announced a run of three UK tour dates, which will find him performing at Manchester’s Bridgewater Hall on 28th November.

The news comes after the release of his new album Stages, which hit the number one spot in the midweek charts.  Stages is a collection of some of the greatest musical theatre songs of all time, including classics such as Bring Him Home from Les Miserables, You’ll Never Walk Alone (Carousel), Over the Rainbow (Wizard of Oz) and All I Ask of You (Phantom of the Opera), recorded with a 75 piece orchestra.

Groban describes the album as being filled with ‘gorgeously arranged songs that have stood the test of time’ which attracted him with their combination of ‘incredible melody with an incredible story’.

Groban is joined on the album by Kelly Clarkson for a duet of All I Ask of You; and by Audra McDonald on If I Love You; whilst trumpeter Chris Botti performs on Old Devil Moon.

Tickets for Josh Groban performing at the Bridgewater Hall on 28 November are on sale now priced £40 / £50.

In Review: Sol3 Mio at The Lowry Theatre
In Review: Olafur Arnalds at The Royal Northern College of Music
In Review: Rigoletto at the Manchester Opera House