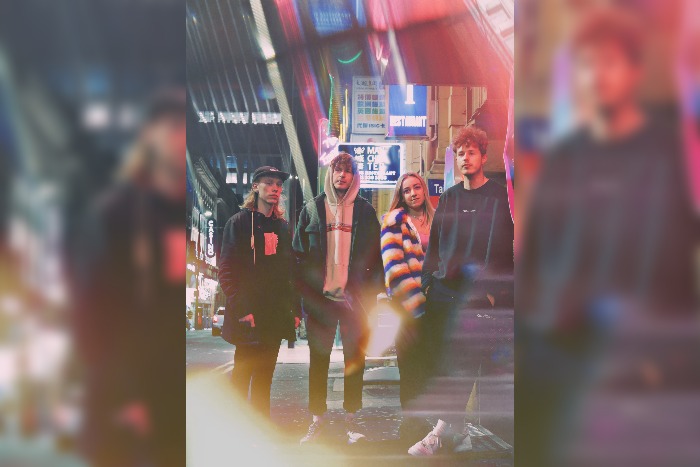 Manchester’s Foxglove are tipped as one of the city’s hottest rising acts, with releases including Car Radio, Selfish and recent single Blind.

We caught up with Abi, Ryan, Liam and Joe to find out more about the band, how they write and record and performing on the Manchester music scene.

2019 has marked a significant developmental year for Foxglove.  Tweaks to their style, more knowledge about the music scene and Joe joining the band have seen them push forwards.  “When Ryan, Liam and myself initially began with Foxglove, we were very focused on making music that we thought would appeal to certain people in certain fan base brackets,” explains Abi. “We were only eighteen/nineteen years old back then, so it’s fair to say that since Joe joined at the back end of 2019, we have ensured that we don’t stifle our creativity” she continues, “and we create the music that we want to create, whatever genre or category that it might fall into. I guess as well when we were younger we were very naive about the whole gigging scene in Manchester and how tough it can be at times to juggle alongside uni and work so we probably weren’t as motivated. Nowadays, we get home from work or uni and work on the band, it’s like having a second job, but we wouldn’t change it for the world.”

One of the results of that hard work is their latest single Blind.  It’s a track which Abi admits the band had under the belt for quite some time, but needed to rework.  It needed a “new lease of life” she explains.  “We wanted it to be bright, bouncy and energetic and we hope that that has been portrayed. It’s definitely a fun track, when we were giving track references to our producer, we wanted similar energy reflected to Sundara Karma’s ‘Loveblood’.”

The writing of Blind started with a few chord strummed in a practice session.  Soon Ryan and Liam joined Abi in jamming, adding riffs, drums and recording it as a voicenote.  “It wasn’t planned and didn’t have lyrics at that time,” elaborates Abi, “I remember going home after practice to my student flat and studying the track, writing down phrases about something that was on my mind at the time, and I guess that’s how it was born. It’s changed a lot since then, but the message and meaning of the track is still the same. It’s a song that I guess a lot of people can relate to, with the lyrics being about giving someone close to you advice, and the frustration you feel when they disregard it and don’t take it.”

In a similar way to Selfish the band recorded the track themselves and then had a producer apply some touches to it afterwards.  They explain that they enjoy this approach, avoiding the time pressured studio setting and giving them the option of trying again and again to achieve the outcome they want.

But this approach does bring its own challenges they explain.  “Challenges can arise when you think about the track too much in the recording stages. Because you’re listening to it on repeat, you start to notice niggly bits that you never noticed and start overthinking every little part of it. It’s a case of telling yourself and having the confidence in yourself of knowing when to stop.”

Whilst elements of their approach have remained the same, they admit that there’s no particular process they follow.  “Honestly, our process changes every time when we write a track, I don’t think we’ve ever done two with the same formula!” laughs Abi. “Sometimes a song forms when we’re jamming and lyrics come next, or sometimes the lyrics come first and then we write around that to mirror the tone of them. Sometimes myself or Joe will come to the table with some chords and a few lyrics too and it can work that way. But it changes every time!”

The resulting track, Blind, has a slightly different feel to previous singles, something we’re keen to ask Foxglove about.  In many ways the answer alludes to how key this year has been in their development.  “I think we’re really enjoying experimenting with different sounds at the moment” explains Abi, “Ryan is always trying to make his guitar sound as far away from a guitar as possible, making synthy and airy sounds. Liam uses a lot of sounds from his drum pad, and Joe has been experimenting with synth bass too. When it comes to recording, we like to layer my vocals too and experiment with those.”

Foxglove have been very active on the Manchester music scene, with shows at Jimmys, YES, The Castle and Sofar Sounds over the last few months.  The mention of Sofar, clearly excites the band:  “It was amazing! Something that we’ve wanted to do for a looong time! Very intense though as people are there to watch the music and listen to what you have to say, as opposed to some gigs where people are just talking and drinking and not really paying attention. It was really nice and even though it was really nerve-wracking it had to be one of the best gigs that we’ve done. We really enjoyed playing stripped back too.”

Ahead of shows their preparation is remarkably laid back, “A Morrisons meal deal!” laughs Abi, “because we come straight from uni or work, we don’t have time to eat, so it’s kind of become a tradition now that we all get one together and eat it in the green rooms. But in terms of preparation beforehand, we like to practice regularly and chat regularly so we’re all on the same page and know where we’re at with everything.”

And they’re full of praise for the venues they have played at – lauding the sound systems and sound engineers at The Castle, Jimmy’s and YES.

In terms of what to expect, Abi explains their show is about “Lots of energy, glittering guitar sounds, anthemic drumming, a few hair flicks and lots of grooving baselines thrown in for good measure. We definitely try our best to provide the party at our shows, and our ultimate goal is that everyone there has the best time.”

As ever, there’s no stopping for a band and with the release of Blind still fresh, they’re already in the process of recording their next two singles and pushing out as much music as possible.

When do Foxglove perform in Manchester?

Foxglove perform at The Eagle Inn on 5 December for a charity gig for the Khan Foundation with Melissa K, Velvet Shakes and Crush.

They also perform at The Eagle Inn on 12 December with Patawawa.