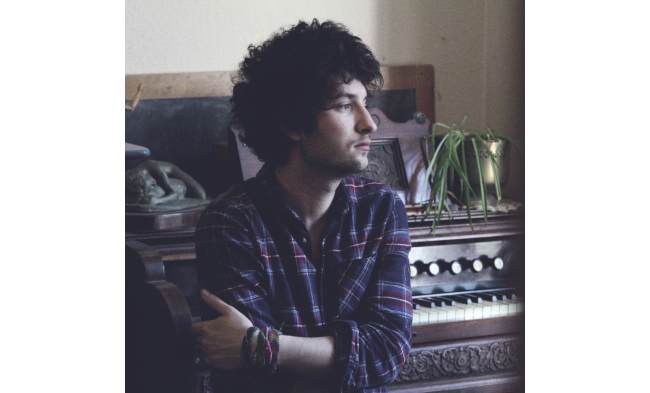 Billy Lockett has carved out quite the reputation for being a highly talented singer songwriter, even drawing comparisons with Bob Dylan.  Recent shows in Manchester at the Deaf Institute and supporting Nina Nesbitt on her acoustic tour, have only served to enhance this standing, showing fans and first-time listeners alike just how skilled he is.  We caught up with the Old Man singer, who has supported the likes of KT Tunstall, Lana Del Rey and Birdy and caught the eye of heavy hitters Fearn Cotton, Scott Mills, Huw Stephens and Gemma Cairney, to chat about his career so far, album plans and touring with Nina Nesbitt.

Welcome to Manchester.  It’s not the first time you’ve played here by any means.
No, Manchester I’ve played a lot.  It’s one of the biggest fan-bases for me.  I played at The Castle in front of about 50 people – I played there a couple of times, and then I supported Nina and then Lana Del Rey at the Apollo and Deaf Institute most recently … and now here [supporting Nina Nesbitt on her acoustic tour].  I played Sound Control as well.  I’ve been here a lot!  And I’ve got The Ruby Lounge on my next tour, coming up in March [22nd].

So this is the fourth date of the tour.  How’s it all going?
It’s good.  It’s crazy.  It’s really fun.  Me and Nina have been friends for years and it’s always better to go on tour with a mate.  The fans have been great, the audiences have been big and Nina’s fans are so engaging as well – they really love to focus and listen to every word, which is really nice.  They’re really dedicated fans.  There’s a lot of partying going on and I’m trying to keep up with her – Nina’s a bit of a party animal at the moment!  That’s a good thing.

So how did you come to be involved with the tour?
Nina gave me my first ever tour around two years ago, all around the UK, when she was at the level I’m at now and I was just starting off, so she gave me my first fan-base basically, my first ever experience of people I don’t know, who aren’t mates, who like my music.  Ever since, she’s helped me out, all the way through to now.

How do you approach your gigs?  Any routines or rituals?
I tend to warm up for quite a while and that gets me into the zone.  Other than that, have a beer!  I quite like working on tracks and recordings on my laptop with my engineer before we go on.  Even though that’s such a different part of the music, that calms me down a little bit.

There’s been talk of an album coming up.  How’s that going?  Have you started writing it yet?
Yes, I’ve started writing it.  I’ve started a lot of it actually – I’ve got about ten songs so far.  I’m hoping to write about 100 songs by the end of March and then shortlist them down to the album, but there’s no release date yet.  I think the next thing I’m going to do is an album, I think I’m done with EPs.  I’ve done three and I’m happy with them, but I’m putting that to bed now and doing the big debut album.

In terms of your approach, you’ve had quite a DIY approach to music – self-taught piano, self-taught guitar, self released EPs, are you continuing with that approach?
Exactly.  I would love to find the right label for the album.  I’ve enjoyed doing it DIY but there’s only so far you can go without a record deal, but then a lot of my friends have signed deals too early and it’s all gone wrong – they’ve rushed everything and it’s not been right, they’ve not known their sound, so I’m glad that when I do sign a deal I’m completely sure of what it’s going to sound like and what I want it to sound like.  I’ve done all the legwork – I’ve got the fans and the team around me to look after me instead of being a kind of product who gets signed and chucked into whatever they want me to be.

You’ve always worn your heart on your sleeve in your songwriting.  Is that the route you’re going to continue with?
Yeah.  A lot of people are comparing me to the piano Dylan at the moment, which is fine with me.  A lot of my songs are about real things, quite honest and telling the truth in my songs.  I’m trying to make it less personal recently and trying to get a bit more engaging with the crowd with the songs – obviously you need to make sure they relate to people, but I don’t think I’ll ever stop wearing my heart on my sleeve.  That’s just me.

Style-wise you’ve changed directly slight recently, with a bit more of a Coldplay/Radiohead influence.  What brought that about?  Was it deliberate or a more natural evolution?
A bit of both.  I was doing guitar songs, I was playing non-stop guitar – I wanted to make the crowd really engage with me and make sure everybody had a good time, jumping around and then I just thought I don’t want to do that.  All the music I love is emotional and gets to me because it’s personal and I listen to every word.  I don’t want people to just come to my shows and go home with a sweat because they danced to the song that they know that they sang drunk, I want it to be really like, ‘I came away inspired’, almost like watching a movie.

Any potential collaborations you’re considering for your album?
Erm, not yet, but if Eminem is free, then hopefully on the B-sides!!

Any final words for your fans?
I hope you enjoy it, please come back to my March headline show at The Ruby Lounge – that’s going to be my biggest ever Manchester gig, so I really want to sell it out.

Billy Lockett performs in Manchester again at The Ruby Lounge on 22nd March 2015.