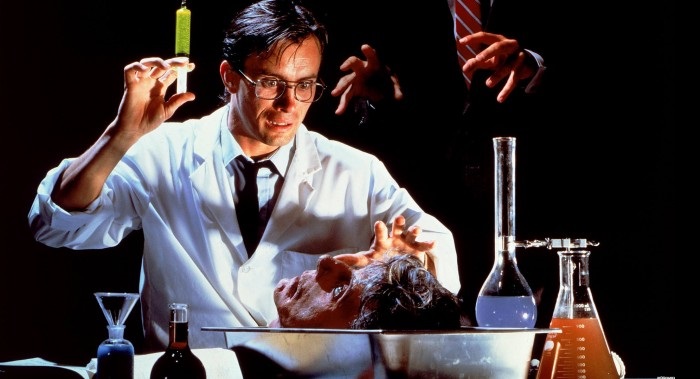 HP Lovecraft inspired generations of literary greats with his text, but his inspiration of 80’s horror films isn’t to be overlooked, and Grimm Up North are celebrating with two of the best cinematic adaptions of his works – Re: Animator and From Beyond (Directed and Produced by Stuart Gordon and Brian Yuzna).

To make the evening extra-special producer and self-confessed Lovecraft fanboy Brian Yuzna will be on hand for a for a special Q&A about the films and their influences. 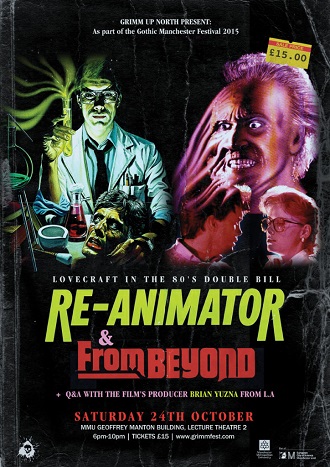 Grimm Up North presents Lovecraft movies Re-Animator and From Beyond.

In this classic, Herbert West (pictured top) is a Swiss scientist who has discovered a fluid which brings dead tissue back to life.  After the suspicious death of his professor in Switzerland, West moves to Miskatonic University to continue his research.  He involves fellow student Dan Cain and his fiancee Megan Halsey in his research by experimenting on their dead cat.  Dan, fascinated by West’s research, agrees to smuggle him in to the hospital morgue with predictable results

Dr Pretorius and his colleagues are working on a sensational experiment: by means of stimulation of the pineal gland, they want to open the human mind to higher dimensions.  When the experiment success, however, they are immediately attacked by terrible life forms, which apparently are floating around us all the time.  When Dr Pretorius is killed by one of them, Dr Tillinghast is under suspicion are thrown in to the mental ward due to his stories.  Only the abmitious psychologist Dr McMichaels believes him and wants to continue the experiment.

Previewed: The Oresteia at Home
Previewed: Body of Light at Z-arts
In Review: Hidden at the King’s Arms Theatre