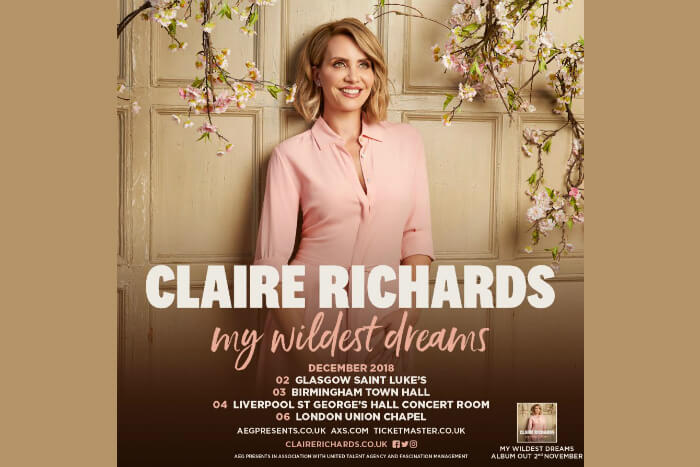 She has now confirmed four live dates across the UK including Liverpool.  The tour kicks off in December at Glasgow’s St Lukes, with further dates in Birmingham, Liverpool and London.

Speaking about the tour, Claire Richards commented, “I can’t actually believe I’m going out on my first ever solo tour – making the ‘My Wildest Dreams‘ album has been such an incredible experience and every song means something very special to me. I can’t wait to head out on the road and share them with everyone!”

Claire Richards announced last week that she has signed a record deal with Sony Music.  My Wildest Dreams is due for release on 2 November.  The album marks the first time that Claire Richards has branched off alone. As part of Steps, who stormed the charts last year with their #1 single Scared of the Dark and #2 album Tears On The Dancefloor, Claire has achieved a huge amount of success around the world. While the band take a well-earned break from touring before starting on a new album in 2019, Claire has jumped at the chance to pursue one of her lifelong ambitions and work on an album of her own.

Where and when does Claire Richards headline in Liverpool?