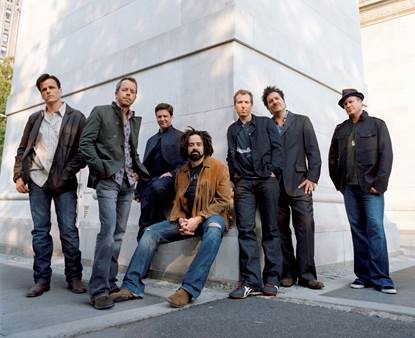 Counting Crows, one of the most successful bands of the last twenty years, have announced a European tour, which will see them performing seven gigs in the UK, including one at the O2 Apollo in Manchester on 7th November 2014.

With sales of over 20 million albums worldwide since their breakout album August and Everything After in 1993 (an album which went multi-platinum), Counting Crows will be performing songs from their extensive catalogue of hits (they have six studio albums already under their belt) as well as new material from their forthcoming studio album Somewhere Under Wonderland, their first original material in seven years and their first album since Saturday Nights & Sunday Mornings in 2008.

Counting Crows [Adam Duritz (vocals), Jim Bogios (drums), David Bryson (guitar), Charlie Gillingham (keyboards), David Immergluck (guitar), Millard Powers (bass) and Dan Vickrey (guitar)] are renowned for outstanding live performances and rated as one of the top live bands in the world for their dynamic performances, recognised for unique and innovative concerts. This is something they have honed since they formed in 1991.

And they certainly seem excited to be visiting Europe again: “Probably the coolest thing about a career like ours is the chance to really see the world. I’ll never forget when we landed in London to start our first European tour, or what it was like to go for a walk in the middle of the night after a show and end up at the Eiffel Tower,” said lead vocalist Adam Duritz. “European tours are magic. I cannot wait.”

The UK leg of the tour will see them perform at:-

Support will come from Lucy Rose.

Counting Crows perform at the O2 Apollo on 7th November 2014. Tickets priced £34.50 plus BF with VIP experiences available from VIPNation.eu. Tickets go on sale Friday 13th June at 9am.